Fire on the "Vomit Comet" 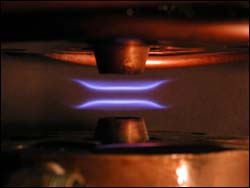 Twin flames burning gaseous and solid fuel pellets exhibit different chemical processes on earth and in the near zero-gravity environment of space.

Researchers from the USC Viterbi School of Engineering say solid fuel particles may be safer for hazardous environments on earth and burn more efficiently in the microgravity of space than gaseous fuels, which are more combustible and difficult to transport.

In the Spring 2004 issue of NASA Space Research, Fokion Egolfopoulos and Charles Campbell, of the Viterbi School’s Department of Aerospace and Mechanical Engineering, report that they have made significant progress toward understanding the complex chemical processes that take place when tiny particles of solid fuels burn.

Their findings could lead to the design of safer and more efficient solid fuels for propulsion in space or for maintaining human outposts on the moon or Mars. Their research could also benefit fire-prevention practices.

“Understanding the thermal effects is a first step toward improving fuel economy in both space vehicles and those we use on Earth,” said Egolfopoulos. “It’s also a good start towards preventing spontaneous combustion in dangerous work environments, like in lumber milling, in grain elevators or in mine galleries. It ’ s a sort of walk-before-you-run kind of thing.”

Funded by NASA, the researchers made detailed studies of solid fuel combustion, including the effects of gravity on the process. They measured the burning characteristics of various solid fuel particles on earth and in microgravity, using NASA’s KC-135 aircraft — known as the “Vomit Comet” — to simulate the weightlessness of space.

“ It takes some getting used to, but after a while, you learn to conduct the experiment very precisely, ” said Mustafa Gurhan Andac, a post-doctoral research associate from the Viterbi School’s Combustion and Fuels Laboratory, who ran the experiments in the nearly weightless environment aboard the NASA aircraft. “ You only have about 23 seconds in zero-g, so you have to ignite the flame before the zero-g parabola starts and be sure to finish the experiment and record the data during those precious seconds of weightlessness. ”
In their experiments, the team used two laminar, smooth-burning flames in an “opposed-jet” configuration (see photograph) to compare the consumption of solid fuel and gaseous fuel. The bottom burner slowly spews gas to carry solid fuel pellets to the flame, while the top burner issues particle-free gas to fuel the flame.

“Depending on the prevailing flow conditions, and characteristics of the particles, some particles will ignite and burn completely, whereas others behave as half-inert and burn only partially,” Egolfopoulos said. The researchers measured particle size, speed and distribution to determine the optimal conditions for efficient combustion.

“In reduced gravity, a low-speed gas was more effective for complete fuel consumption,” said Campbell. “However, when we ignited the pellets in our laboratory at USC, in earth’s gravity, a much higher gas velocity was needed to carry the pellets to the flame. Increased speed caused some of the fuel pellets to burn incompletely.”

NASA is finding additional applications for the work as the space agency looks to longer spaceflight missions and human exploration of the moon and Mars. In trips to the moon or Mars, solid fuels derived from the lunar or Martian soil, or solid carbon, extracted from the Martian atmosphere, may fuel the astronauts ’ return flights to Earth.

The researchers have created a computational model to numerically simulate their experiments and predict the combustion of solid fuel particles in a gaseous stream, based on thermal conditions and particle properties.

They will present their findings, and a few surprises, at the 30 th International Symposium on Combustion, to be held July 25-30 in Chicago, Illinois.