Home / Physics and Astronomy / Materials On The Nanoscale May Sometimes Be Subject To The Same Physical Rules As Their Macro-World Counterparts
13.07.2004 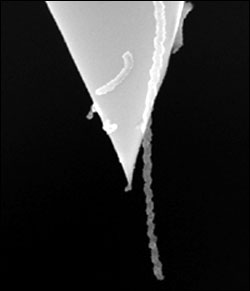 A nanospring hangs from the tip of an atomic force microscope. The spring measures 20 nanometers wide and about 1 micrometer in length.

Researchers at the Georgia Institute of Technology and NASA suggest that materials on the nanoscale may sometimes be subject to the same physical rules as their macro-world counterparts. The findings provide an exception to the conventional scientific notion that objects small enough to be measured in nanometers (one-billionth of a meter) behave according to different rules than larger objects.

A team led by Lawrence Bottomley in Georgia Tech’s School of Chemistry and Biochemistry and Jonathon Colton in the School of Mechanical Engineering found that the mechanical response of a multi-walled carbon nanospring was remarkably similar to the rules that govern the mechanical properties of springs on the macro scale. The results are published in the American Chemical Society journal Nano Letters, Volume 4, Number 6.

“Small may not necessarily be different when it comes to the mechanical properties of springs,” said Bottomley. The findings suggest there may be other nano materials that behave in ways similar to their macroscale counterparts.

The results were surprising because they ran counter to the common wisdom in the literature said Colton.

The team used an atomic force microscope to compress a multi-walled carbon nanospring attached to the cantilever probe tip. By simultaneously monitoring cantilever deflection, oscillation amplitude and resonance of the cantilever, the group found the nanospring compressed and buckled in the same ways a macroscale spring would.

In this one application we modeled the performance of a nanospring using the equations that are used to describe two macroscale springs in series. The agreement of data with the theory is remarkably good, said Bottomley.

In the future, the team plans further tests on multiwalled carbon nanosprings to correlate the number of walls, number of coils, and helical pitch with mechanical performance.

Other members of the research team included Mark Poggi, Jeffrey Boyles and Andrew McFarland from Georgia Tech; Cattien Nguyen from the ELORET Corporation and Ramsey Stevens and Peter Lillehei from NASA.