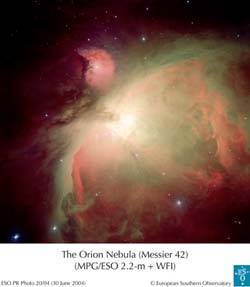 Orion the Hunter is perhaps the best-known constellation in the sky, well placed in the winter for observers in both the northern and southern hemispheres, and instantly recognisable. Just below Orion’s belt (three distinctive stars in a row), the hilt of his sword holds a great jewel in the sky, the beautiful Orion Nebula. Bright enough to be seen with the naked eye, the nebula, also known as Messier 42, is a wide complex of gas and dust, illuminated by several massive and hot stars at its core, the famous Trapezium stars.

For astronomers, Orion is surely one of the most important constellations, as it contains one of the nearest and most active stellar nurseries in the Milky Way, the galaxy in which we live. Here tens of thousands of new stars have formed within the past ten million years or so – a very short span of time in astronomical terms. For comparison: our own Sun is now 4,600 million years old and has not yet reached half-age. Reduced to a human time-scale, star formation in Orion would have been going on for just one month as compared to the Sun’s 40 years.

In fact, located at a distance of 1500 light years, the Orion Nebula plays such an important role in astrophysics that it can be argued that our understanding of star formation is for a large part based on the Orion Nebula.

The richness of the stellar cluster inside the Orion Nebula makes it an ideal, and unique, target for high resolution and wide-field imaging. Following some pioneering work made a few years ago, an international team of astronomers [1], led by Massimo Robberto (European Space Agency and Space Telescope Science Institute), used the Wide Field Imager (WFI), a 67-million pixel digital camera that is installed at the ESO/MPG 2.2m telescope at La Silla, to obtain very deep images of this region. ESO PR Photo 20/04 shows a false-colour composite of images obtained in four different wavebands (see technical information below).

Among others, these observations allow the astronomers to measure the rates of mass that falls onto the young stars (the mass accretion rates) and to determine if it depends on the position of the stars in the cluster. If this were the case, it would indicate that the final stages of star formation are affected by the onset of ionising radiation from the most massive stars. From a preliminary study with the Hubble Space Telescope, the astronomers found that indeed the mass accretion rates are lower in the Orion Nebula Cluster than in other, more diffuse star-forming regions. The analysis of these new WFI images should allow confirmation of this hypothesis.

The astronomers also obtained images of the Orion Nebula in several narrow-band filters corresponding to emission lines – hydrogen (Halpha), oxygen ([OIII]), and sulphur ([SII]) – enabling them to probe the morphology of the nebula in these prominent lines. It is rather obvious from the image that for example some regions are redder than others, providing the astronomers with important clues on the conditions prevailing in the nebula.

In the next months, a large international collaboration also led by M. Robberto will use the Hubble Space Telescope to survey with unprecedented sensitivity (23-25 mag) and spatial resolution approximately 50% of the field imaged by the present WFI observations. The astronomers expect to discover and classify an unknown but substantial population of young double stars, low mass stars and brown dwarfs.