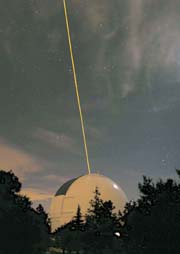 The Lick Observatory Laser Guide Star Adaptive Optics system in operation on July 22, 2003.The laser beam is visible for several kilometers. The yellowish cast of the dome is due to the street lights of nearby San Jose.

For the first time, scientists from UC Berkeley and Lawrence Livermore, in conjunction with astrophysicists from the California Institute of Technology, UC Santa Cruz, the National Science Foundation’s Center for Adaptive Optics and UC’s Lick Observatory, have observed that distant larger stars formed in flattened accretion disks just like the sun.

Using the laser guide star adaptive optics system created by LLNL scientists, the team was able to determine that some of the relatively young yet massive Herbig Ae/Be stars contain biconical nebulae, polarized jets and circumstellar disks. Less massive stars including the sun are believed to be formed in a swirling spherical cloud that collapses into a disk.

The astronomers observed a strongly polarized, biconical nebula 10 arcseconds in diameter around the star LkHa 198 and a polarized jet-like feature in LkHa 198-IR. The star LkHa 233 featured a narrow, unpolarized dark lane similar to an optically thick circumstellar disk. The research appears in the Feb. 27 edition of the journal Science.

The adaptive optics system enables astronomers to minimize the blurring effects of the Earth’s atmosphere, producing images with unprecedented detail and resolution. The adaptive optics system uses light from a relatively bright star to measure the atmospheric distortions and to correct for them, but only about 1 percent of the sky contains stars sufficiently bright to be of use. The laser guide star enables astronomers to study nearly the entire sky with the high resolution of adaptive optics.

“Lasers have been developed into powerful tools for everything from surgery to machining,” said Claire Max, deputy director of CfAO and an astrophysicist with LLNL’s Institute of Geophysics and Planetary Physics. “Now, we are using lasers to observe young stars just after they have formed from their surrounding gas clouds.”

Herbig Ae/Be stars are young stars with masses between 1.5 and 10 times that of the sun and are less than 10 million years old, which is young by astronomical standards. While they are fundamentally very luminous, many are so distant that one can’t see details of their immediate environments without the use of a laser guide star adaptive optics system. These stars are thought to be the young stage of the massive stars that later experience supernova explosions and trigger star formation in nearby clouds.

The only laser guide star systems in the world currently being used regularly for astronomy are at the at Lick and W.M. Keck observatories, and were built by LLNL. The sodium dye laser, under the direction of LLNL laser scientists Deanna Pennington and Herbert Friedman, completes the adaptive optics system mounted to Lick’s Shane telescope. It is operated by Lick staff.

The observations and development of the laser guide star were funded by the National Science Foundation and the Department of Energy.