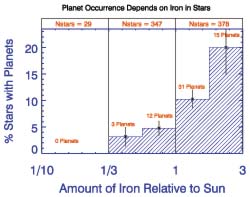 A comparison of 754 nearby stars like our sun – some with planets and some without – shows definitively that the more iron and other metals there are in a star, the greater the chance it has a companion planet.

“Astronomers have been saying that only 5 percent of stars have planets, but that’s not a very precise assessment,” said Debra Fischer, a research astronomer at the University of California, Berkeley. “We now know that stars which are abundant in heavy metals are five times more likely to harbor orbiting planets than are stars deficient in metals. If you look at the metal-rich stars, 20 percent have planets. That’s stunning.”

“The metals are the seeds from which planets form,” added colleague Jeff Valenti, an assistant astronomer at the Space Telescope Science Institute (STScI) in Baltimore, Md.

Fischer will present details of the analysis by her and Valenti at 1:30 p.m. Australian Eastern Standard Time (AEST) on Monday, July 21, at the International Astronomical Union meeting in Sydney, Australia.

Iron and other elements heavier than helium – what astronomers lump together as “metals” – are created by fusion reactions inside stars and sown into the interstellar medium by spectacular supernova explosions. Thus, while metals were extremely rare in the early history of the Milky Way galaxy, over time, each successive generation of stars became richer in these elements, increasing the chances of forming a planet.

“Stars forming today are much more likely to have planets than early generations of stars,” Valenti said. “It’s a planetary baby boom.”
As the number of extrasolar planets has grown – about 100 stars are now known to have planets – astronomers have noticed that stars rich in metals are more likely to harbor planets. A correlation between a star’s “metalicity” – a measure of iron abundance in a star’s outer layer that is indicative of the abundance of many other elements, from nickel to silicon – had been suggested previously by astronomers Guillermo Gonzalez and Nuno Santos based on surveys of a few dozen planet-bearing stars.

The new survey of metal abundances by Fischer and Valenti is the first to cover a statistically large sample of 61 stars with planets and 693 stars without planets. Their analysis provides the numbers that prove a correlation between metal abundance and planet formation.

“People have looked already in fair detail at most of the stars with known planets, but they have basically ignored the hundreds of stars that don’t seem to have planets. These under-appreciated stars provide the context for understanding why planets form,” said Valenti, who is an expert at determining the chemical composition of stars.

“These data suggest that there is a threshold metalicity, and thus not all stars in our galaxy have the same chance of forming planetary systems,” Fischer said. “Whether a star has planetary companions or not is a condition of its birth. Those with a larger initial allotment of metals have an advantage over those without, a trend we’re now able to see clearly with this new data.”

The two astronomers determined metal composition by analyzing 1,600 spectra from more than 1,000 stars before narrowing the analysis to 754 stars that had been observed long enough to rule a gas giant planet in or out. Some of these stars have been observed for 15 years by Fischer, Geoffrey Marcy, professor of astronomy at UC Berkeley, and colleague Paul Butler, now at the Carnegie Institution of Washington, in their systematic search for extrasolar planets around nearby stars. All 754 stars were surveyed for more than two years, enough time to determine whether a close-in, Jupiter-size planet is present or not.

Though the surfaces of stars contain many metals, the astronomers focused on five – iron, nickel, titanium, silicon and sodium. After four years of analysis, the astronomers were able to group the stars by metal composition and determine the likelihood that stars of a certain composition have planets. With iron, for example, the stars were ranked relative to the iron content of the sun, which is 0.0032%.

“This is the most unbiased survey of its kind,” Fischer emphasized. “It is unique because all of the metal abundances were determined with the same technique and we analyzed all of the stars on our project with more than two years of data.”

Fischer said the new data suggest why metal-rich stars are likely to develop planetary systems as they form. The data are consistent with the hypothesis that heavier elements stick together easier, allowing dust, rocks and eventually planetary cores to form around newly ignited stars. Since the young star and the surrounding disk of dust and gas would have the same composition, the metal composition observed from the star reflects the abundance of raw materials, including heavy metals, available in the disk to build planets. The data indicate a nearly linear relationship between amount of metals and the chance of harboring planets.

“These results tell us why some of the stars in our Milky Way galaxy have planets while others do not,” said Marcy. “The heavy metals must clump together to form rocks which themselves clump into the solid cores of planets.”

The research by Fischer and Valenti is supported by the National Aeronautics and Space Administration, the National Science Foundation, the Particle Physics and Astronomy Research Council (PPARC) in the United Kingdom, the Anglo-Australian Observatory, Sun Microsystems, the Keck Observatory and the University of California’s Lick Observatories.