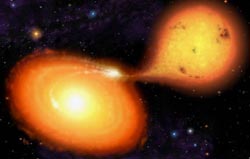 Astronomers Steve Howell of the University of California, Riverside and Thomas E. Harrison and Heather Osborne of New Mexico State University have found from their observations of over a dozen mass-losing stars in ’cataclysmic variables’ that most of the secondary stars do not appear to be normal main sequence stars in terms of their apparent abundances. To various degrees, each star seems to have low to no carbon and other odd mixtures of elements such as sodium and calcium, the astronomers announced today at the American Astronomical Society meeting in Nashville, Tenn.

(A main sequence star is a star that is in its normal state, such as the sun. These stars have well-defined relations between luminosity, temperature, size and mass.)

“Cataclysmic variables are binary stars consisting of a white dwarf primary and a lower mass secondary star,” explained Howell. A binary star system consists of two stars orbiting about their common center of mass and held together by their mutual gravitational attraction. A white dwarf is a star that has exhausted all its nuclear fuel and has collapsed to a very small size, about the size of the Earth.

Howell further explained that the high gravity of the white dwarf pulls matter off the lower-mass, but larger secondary star. This material often forms a disk around the white dwarf. The orbital periods of these binaries are short, typically ranging from approximately 12 hours to 80 minutes. “Cataclysmic variables are very small systems,” he said. “The entire binary would completely fit inside our sun.”

For their research, the three astronomers used telescopes to obtain spectral observations of mass-losing stars in cataclysmic variables. “Our findings suggest that the normal idea that ’main sequence’ rules apply to the mass-losing stars appears not to be the case,” said Howell. “Furthermore, the observed abundance patterns are consistent with stellar material formed by a process called CNO or carbon-nitrogen-oxygen burning, which is only thought to occur in stars with masses greater than those of the mass-losing stars.

The research, funded by the National Science Foundation, was performed in the past two years using telescopes located at the Kitt Peak National Observatory, near Tucson, Ariz., and on Mauna Kea, Hawaii, using the NASA infrared telescope (IRTF) and the United Kingdom infrared telescope (UKIRT).