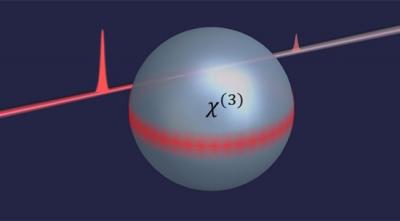 This is a microsphere. Credit: Xiao Yun-Feng

Very recently, a team of researchers led by Professor Xiao Yun-Feng and Professor Gong Qihuang at Peking University, in collaboration with Professor Qiu Cheng-Wei at National University of Singapore and Professor Stefan Rotter at Vienna University of Technology, has demonstrated a spontaneously symmetry-broken microlaser in an ultrahigh-Q WGM microcavity, exhibiting reconfigurable propagating directions of the chiral laser. This work has been published online in Nature Communications on February 28, 2019 (DOI: 10.1038/s41467-020-14861-5).

In previous studies, existing solutions for a chiral microlaser mainly resort to explicitly breaking the structure symmetry of a WGM microcavity. Unfortunately, the scalability and reconfigurability of these preceding strategies are strongly limited since the devices, once fabricated, come with a prefixed, non-tailorable laser directionality. In this work, the researchers achieve a reconfigurable chiral microlaser in a symmetric WGM microcavity by utilizing the cavity-enhanced optical Kerr nonlinearity.

“We employed microcavity Raman lasers in the experiment, which generally involve a pair of balanced clockwise (CW) and counterclockwise (CCW) waves,” said Cao Qi-Tao, a Ph.D. student at Peking University and one of the co-first authors of this work. The Raman laser waves in the two directions are coupled together through linear surface Rayleigh scattering and nonlinear phase modulation by optical Kerr effect.

As the power of the microlaser with a particular phase increases and reaches a threshold, the linear coupling is completely compensated by the nonlinear coupling. Above this threshold, the chiral symmetry of the laser field breaks spontaneously, and the Raman wave evolves randomly into a chiral state with a CW or CCW dominated laser propagation. Experimentally, an unprecedented ratio of counter-propagating emission intensities is obtained exceeding 160:1.

Furthermore, the directionality of such the chiral microlaser is all-optically and dynamically controlled by the bias in the pump direction, and the symmetry breaking threshold is adjustable using a nanotip scatterer.

“Our results break the perception boundary of how to realize a reconfigurable coherent light source, to enable a powerful reconfigurability of a laser's directionality and chirality, and to extend a long-ranging impact on on-chip nanophotonics and nonlinear processes,” said Professor Xiao. “Such a spontaneously chiral emitting laser also can be extended to various microstructures, and is almost free from the material limit due to the ubiquity of the Kerr nonlinearity.”