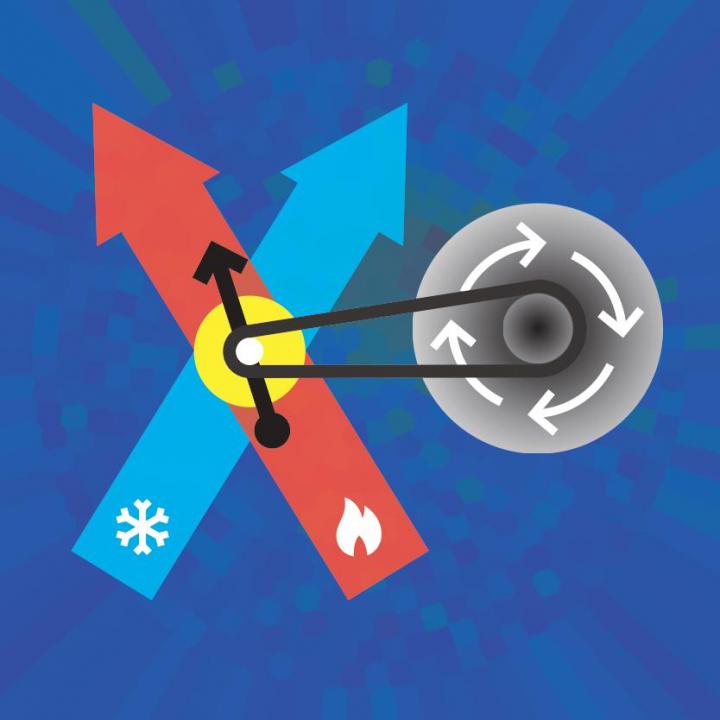 The world's smallest engine works due to its intrinsic spin, which converts heat absorbed from laser beams into oscillations, or vibrations, of the trapped ion. Credit: Professor Goold, Trinity College Dublin.

Work performed by Professor John Goold's QuSys group in Trinity's School of Physics describes the science behind this tiny motor.

The research, published today in international journal Physical Review Letters, explains how random fluctuations affect the operation of microscopic machines. In the future, such devices could be incorporated into other technologies in order to recycle waste heat and thus improve energy efficiency.

The engine itself – a single calcium ion – is electrically charged, which makes it easy to trap using electric fields. The working substance of the engine is the ion's “intrinsic spin” (its angular momentum). This spin is used to convert heat absorbed from laser beams into oscillations, or vibrations, of the trapped ion.

These vibrations act like a “flywheel”, which captures the useful energy generated by the engine. This energy is stored in discrete units called “quanta”, as predicted by quantum mechanics.

“The flywheel allows us to actually measure the power output of an atomic-scale motor, resolving single quanta of energy, for the first time,” said Dr Mark Mitchison of the QuSys group at Trinity, and one of the article's co-authors.

Starting the flywheel from rest — or, more precisely, from its “ground state” (the lowest energy in quantum physics) — the team observed the little engine forcing the flywheel to run faster and faster. Crucially, the state of the ion was accessible in the experiment, allowing the physicists to precisely assess the energy deposition process.

Assistant Professor in Physics at Trinity, John Goold said: “This experiment and theory ushers in a new era for the investigation of the energetics of technologies based on quantum theory, which is a topic at the core of our group's research. Heat management at the nanoscale is one of the fundamental bottlenecks for faster and more efficient computing. Understanding how thermodynamics can be applied in such microscopic settings is of paramount importance for future technologies.”

The groundbreaking experiment was carried out by a research group led by Professor Ferdinand Schmidt-Kaler and Dr Ulrich Poschinger of Johannes Gutenberg University in Mainz, Germany.