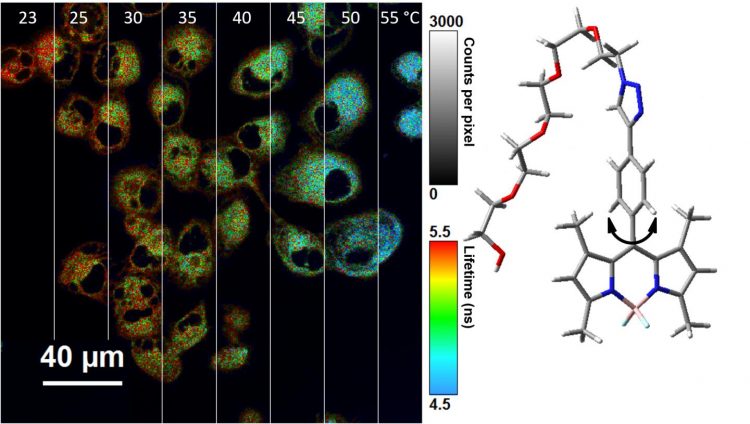 Rice University chemists modified BODIPY molecules to serve as nano-thermometers inside cells. The chart on the left is a compilation of fluorescent lifetime micrographs showing the molecules' response to temperature, in Celsius. At right, the structure of the molecule shows the rotor, at bottom, which is modified to restrict 360-degree rotation. Credit: Meredith Ogle/Rice University

How do you know a cell has a fever? Take its temperature.

That's now possible thanks to research by Rice University scientists who used the light-emitting properties of particular molecules to create a fluorescent nano-thermometer.

The Rice lab of chemist Angel Martí revealed the technique in a Journal of Physical Chemistry B paper, describing how it modified a biocompatible molecular rotor known as boron dipyrromethene (BODIPY, for short) to reveal temperatures inside single cells.

It means that at a specific temperature, the light turns off at a particular rate, and that can be seen with a fluorescence-lifetime imaging microscope.

Martí said colleagues at Baylor College of Medicine challenged him to develop the technology. “Everybody knows old thermometers based on the expansion of mercury, and newer ones based on digital technology,” he said.

“But using those would be like trying to measure the temperature of a person with a thermometer the size of the Empire State Building.”

The technique depends on the rotor. Martí and Rice graduate student and lead author Meredith Ogle constrained the rotor to go back and forth, like the flywheel in a watch, rather than letting it rotate fully.

“It pretty much wobbles,” Martí said.

“What we measure is how long the molecule stays in the excited state, which depends on how fast it wobbles,” he said. “If you increase the temperature, it wobbles faster, and that shortens the time it stays excited.”

The effect, Martí said, is conveniently independent of the concentration of BODIPY molecules in the cell and of photobleaching, the point at which the molecule's fluorescent capabilities are destroyed.

“We found out that if we constrain the rotation of this motor, then at high viscosities, the internal clock — the lifetime of this molecule — becomes completely independent of viscosity,” he said. “This is not particularly common for these kind of probes.”

Martí said the technique might be useful for quantifying the effects of tumor ablation therapy, where heat is used to destroy cancer cells, or in simply measuring for the presence of cancers. “They have a higher metabolism than other cells, which means they're likely to generate more heat,” he said. “We'd like to know if we can identify cancer cells by the heat they produce and differentiate them from normal cells.”

The Dunn Collaborative Research Grant Program and the Optical Imaging and Vital Microscopy Core at Baylor College of Medicine, funded by the National Institutes of Health, supported the research.

This news release can be found online at http://news.rice.edu/2019/08/22/temperatures-inside-cells-taken-by-nano-thermometer-2/

Rice University chemists modified BODIPY molecules to serve as nano-thermometers inside cells. The chart on the left is a compilation of fluorescent lifetime micrographs showing the molecules' response to temperature, in Celsius. At right, the structure of the molecule shows the rotor, at bottom, which is modified to restrict 360-degree rotation. (Credit: Meredith Ogle/Rice University)