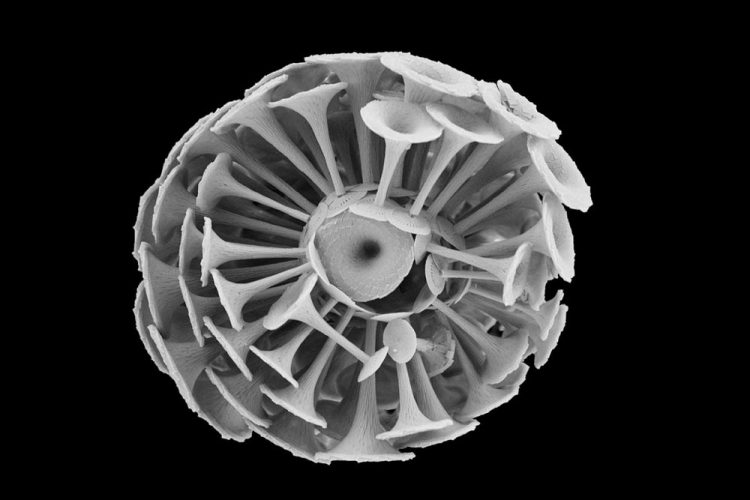 Tiny algae called coccolithophores, such as this Discosphaera tubifera, play a major role in the global carbon cycle. New research shows that coccolithophores are mysteriously scarce in one of the most fertile and productive regions of the Atlantic Ocean. Credit: William Balch and Colin Fisher/Bigelow Laboratory for Ocean Sciences

A globally important ocean algae is mysteriously scarce in one of the most productive regions of the Atlantic Ocean, according to a new paper in Deep Sea Research I. A massive dataset has revealed patterns in the regions where Atlantic coccolithophores live, illuminating the inner workings of the ocean carbon cycle and raising new questions.

“Understanding these large-scale patterns helps us understand ocean productivity in the entire Atlantic basin,” said William Balch, a senior research scientist at Bigelow Laboratory for Ocean Sciences and lead author of the paper. “Collecting this dataset has been a superhuman effort for my team that has taken hundreds of days at sea and years of analysis.”

The researchers found that coccolithophores both struggle and thrive in unexpected places throughout the Atlantic Ocean. They are most abundant in subpolar and temperate waters and surprisingly scarce around the equator, where an abundance of nutrients and sunlight create one of the most biologically productive regions of the global ocean.

The team also discovered that some coccolithophore species thrive deep below the surface near the farthest reaches of sunlight – within or just above an important water layer called “Sub-Antarctic mode water.”

This distinct feature flows north from the Southern Ocean and provides nutrients to much of the global ocean, including the northern hemisphere. Balch suspects that booming coccolithophore populations in the Southern Ocean are depleting the water layer's nutrient supply and altering its chemistry – potentially making it inhospitable for coccolithophores by the time it reaches the equator.

“Sub-Antarctic mode water exerts a staggering level of control on much of the global ocean,” Balch said. “If coccolithophores are changing its essential properties, then they could be influencing which species grow in food webs as far away as the equator or even in the northern hemisphere.”

Balch and his team built this vast dataset from measurements collected during 10 45-day research cruises through the Atlantic Meridional Transect program, which crosses the Atlantic Ocean between the United Kingdom and the tip of South America.

Their findings also have important applications to observations that rely on NASA ocean color satellites. These powerful oceanographic tools allow scientists to detect coccolithophore populations by measuring the light they reflect back into space, but they require on-the-water measurements to ground-truth the satellite data. NASA was the primary funder of this work.

Coccolithophores build protective crystalline plates from chalk minerals by extracting dissolved inorganic carbon from seawater. The way a species' plates are shaped impacts how those plates scatter light in the surface ocean, especially after they become detached and begin to sink towards the seafloor. The researchers discovered that not all coccolithophores drop their plates, and that the plates found throughout the water column come from just a few species.

This finding vastly simplifies the calculations needed to measure the carbon that coccolithophores contain from satellite reflectance data. Coccolithophores play a major role in the global carbon cycle, and understanding where they live and how they scatter light is essential to quantifying how this important element moves between the surface ocean and seafloor. Ultimately, that carbon is either broken down by deep-sea bacteria or buried in sediment, effectively sequestering it from the atmosphere for thousands of years.

Balch's team, along with an international team of investigators, will continue this research in January, when they embark on a National Science Foundation-funded cruise to answer one of the most important questions raised by this study – how coccolithophores in the Southern Ocean alter Sub-Antarctic mode water before it flows north. Their research will elucidate how these changes may affect productivity further north, and why coccolithophores are so scarce at the equator.

“The grand question remains – what is missing from this equatorial water that makes it not conducive to coccolithophore growth in such a fertile region of the world ocean?” Balch said. “The difference in the amount of coccolithophores at temperate latitudes and the equator is profound, and it has enormous ramifications for the ocean's food webs and the productivity of the entire planet.”

Bigelow Laboratory for Ocean Sciences is an independent, nonprofit research institute located in East Boothbay, Maine. From the Arctic to the Antarctic, Bigelow Laboratory scientists use cutting-edge techniques to understand the ocean's mysteries, address its challenges, and unlock its hidden opportunities. Learn more at bigelow.org, and join the conversation on Facebook, Instagram, and Twitter.