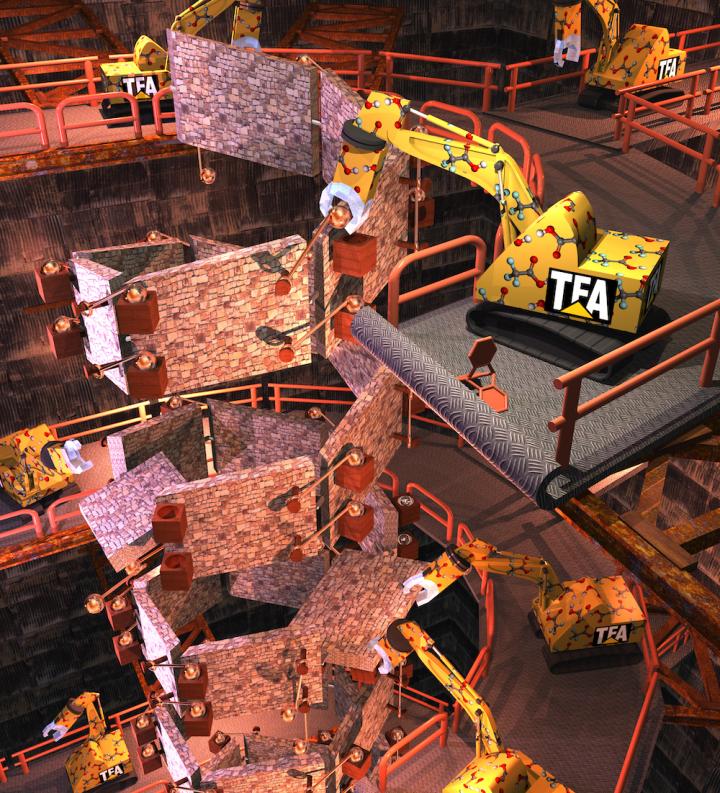 A construction of macro-scale architectures with a helical ladder shape is not even a challenge, but it's a different story when it comes to a molecular scale. Here, the efficient synthesis of one-handed helical ladder polymers is established through a trifluoroacetic acid (TFA)-assisted intramolecular cyclization of chiral triptycenes. Credit: Kanazawa University Usage Restrictions: The image may only be used with appropriate caption and credit.

Moreover, most existing strategies for the synthesis of ladder polymers suffer from severe limitations in terms of selectivity and quantitativity. Another important type of molecules are molecules with a helical structure (such as DNA and proteins), which play an important role in molecular recognition and catalysis.

Thus, the fabrication of molecules that possess both a ladder and a helical structure could open up new applications of polymeric materials.

Tomoyuki Ikai, Timothy M. Swager and colleagues from an international collaboration started from triptycene, an aromatic hydrocarbon that is an achiral molecule, but from which chiral derivatives can be obtained by introducing substituents in the benzene rings in an asymmetric manner.

The researchers then used the chiral triptycenes as a framework to efficiently form single-handed helical ladder polymers using electrophilic aromatic substitution. Steric repulsion in the system resulted in the formation of one-handed twisted ladder units.

The reactions were quantitative and regioselective (that is, there is a preferred direction of chemical bonding), which enabled the synthesis of optically active ladder polymers with well-defined helical geometry. No byproducts were detected.

Several techniques, including spectroscopy and microscopy techniques, were used to characterize the reaction products during synthesis, and molecular dynamics simulations were employed to understand the structure of the resulting molecules, confirming the right-handed helical ladder geometry. The researchers also measured the optical activity of the molecules.

The newly reported synthesis route will open up the synthesis of nanoscale helical ladder architectures and optically active chiral materials. “We believe that these ladder polymers, which can fall into a new category of helical polymers, represent a promising class of advanced materials for use as nanochannels for molecular/ion transport, organic electronics, specific reaction fields, and functional hosts through further modification of the backbone and pendant units,” commented the authors in the paper.

Oxygen can do a favor to synthesize metal-organic frameworks