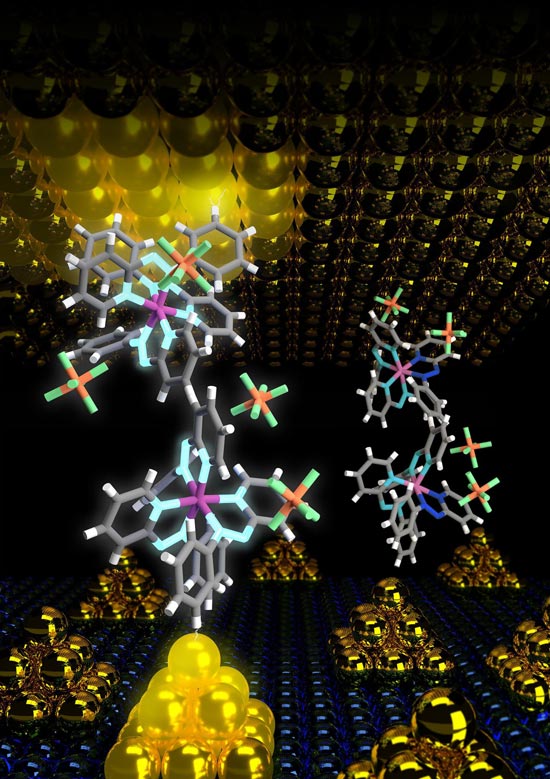 The device structure at a molecular level. The gold nanoparticles on the bottom electrode enhance the field enabling an ultra-low energy operation of the molecular device. Credit: Sreetosh Goswami, Sreebrata Goswami and Thirumalai Venky Venkatesan

The advent of artificial intelligence, machine learning and the internet of things is expected to change modern electronics and bring forth the fourth Industrial Revolution. The pressing question for many researchers is how to handle this technological revolution.

“It is important for us to understand that the computing platforms of today will not be able to sustain at-scale implementations of AI algorithms on massive datasets,” said Thirumalai Venkatesan, one of the authors of a paper published in Applied Physics Reviews, from AIP Publishing.

“Today's computing is way too energy-intensive to handle big data. We need to rethink our approaches to computation on all levels: materials, devices and architecture that can enable ultralow energy computing.”

Brain-inspired electronics with organic memristors could offer a functionally promising and cost- effective platform, according to Venkatesan. Memristive devices are electronic devices with an inherent memory that are capable of both storing data and performing computation.

Since memristors are functionally analogous to the operation of neurons, the computing units in the brain, they are optimal candidates for brain-inspired computing platforms.

Until now, oxides have been the leading candidate as the optimum material for memristors. Different material systems have been proposed but none have been successful so far.

“Over the last 20 years, there have been several attempts to come up with organic memristors, but none of those have shown any promise,” said Sreetosh Goswami, lead author on the paper. “The primary reason behind this failure is their lack of stability, reproducibility and ambiguity in mechanistic understanding. At a device level, we are now able to solve most of these problems,”

This new generation of organic memristors is developed based on metal azo complex devices, which are the brainchild of Sreebata Goswami, a professor at the Indian Association for the Cultivation of Science in Kolkata and another author on the paper.

“In thin films, the molecules are so robust and stable that these devices can eventually be the right choice for many wearable and implantable technologies or a body net, because these could be bendable and stretchable,” said Sreebata Goswami. A body net is a series of wireless sensors that stick to the skin and track health.

The next challenge will be to produce these organic memristors at scale, said Venkatesan.

“Now we are making individual devices in the laboratory. We need to make circuits for large-scale functional implementation of these devices.”

The article, “An organic approach to low energy memory and brain inspired electronics,” is authored by Sreetosh Goswami, Sreebrata Goswami and Thirumalai Venky Venkatesan. The article will appear in Applied Physics Reviews on April 21, 2020 (DOI: 10.1063/1.5124155). After that date, it can be accessed at https://aip.scitation.org/doi/10.1063/1.5124155.

Applied Physics Reviews features articles on significant and current topics in experimental or theoretical research in applied physics, or in applications of physics to other branches of science and engineering. The journal publishes both original research on pioneering studies of broad interest to the applied physics community, and reviews on established or emerging areas of applied physics. See https://aip.scitation.org/journal/are.