Magnetic spins that ‘freeze’ when heated 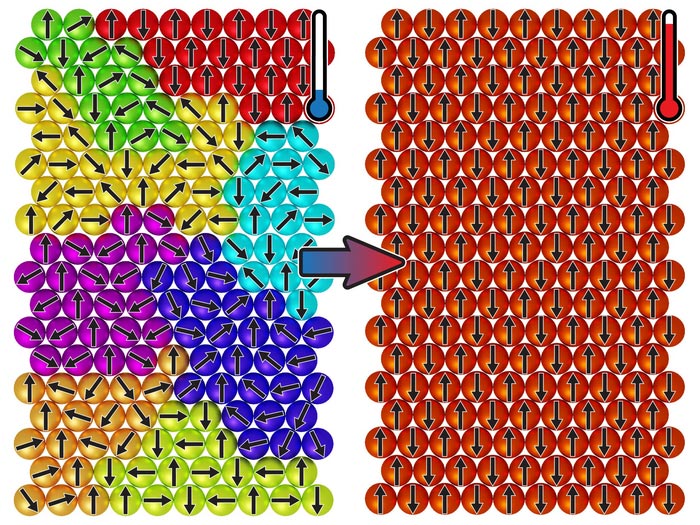 At cooler temperatures, the spins in the material form random patterns, where each pattern whirls like a helix with a particular twist. When heating up the material, the spins choose one of the particular helix patterns, a phenomenon that normally occurs when the temperature decreases in magnetic materials.
Credit: Radboud University

Nature in the wrong direction.

Physicists observed a strange new type of behaviour in a magnetic material when it’s heated up. The magnetic spins ‘freeze’ into a static pattern when the temperature rises, a phenomenon that normally occurs when the temperature decreases. They publish their findings in Nature Physics on July 4th.

The researchers discovered the phenomenon in the material neodymium, an element that they described several years ago as a ‘self-induced spin glass’. Spin glasses are typically alloys where iron atoms for example are randomly mixed into a grid of copper atoms. Each iron atom behaves like a small magnet, or a spin. These randomly placed spins point in all kinds of directions.

Unlike conventional spin glasses, where there is random mixing of magnetic materials, neodymium is an element and without significant amounts of any other material, shows glassy behavior in its crystalline form. The spins form patterns that whirl like a helix, and this whirling is random and constantly changes.

In this new study, the researchers discovered that when they heated neodymium up from -268 C to – 265 C, the spins ‘freeze’ into a solid pattern forming a type of magnet, at the higher temperature. When cooling down the material, the random whirling helix patterns came back. ‘This ‘freezing’ of the pattern does not normally occur in magnetic material’, says Alexander Khajetoorians, professor of scanning probe microscopy at Radboud University.

Temperature increases the energy in a solid, liquid, or gas. The same holds true for a magnet: with more temperature, spins start to shake. “The magnetic behaviour in neodymium that we observed is actually the opposite of what ‘normally’ happens. It’s quite counterintuitive, like water that becomes an ice cube when its heated up”, says Khajetoorians.

These kind of phenomena are not found often in nature. There are very few materials known that behave in the wrong way. Another well-known example is the Rochelle salt, where charges build up and form an ordered pattern at higher temperature, where at lower temperature they are randomly distributed.

The complex theoretical description of spin glasses was the subject of the Nobel Prize in Physics awarded to Parisi in 2021. Figuring out how these spin glasses work also has importance for other scientific fields. ‘If we ultimately can model how these materials behave, this could also be extrapolated to the behaviour of a wide range of other materials.’

The underlying odd behavior was linked to the concept of degeneracy: where many different states have the same energy, and the system becomes frustrated. The effect of temperature is to break this predicament: certain states survive, allowing the system to clearly settle into one pattern. We may also be able to harness this behavior toward new types of information storage or computational concepts, like brain-like computing.