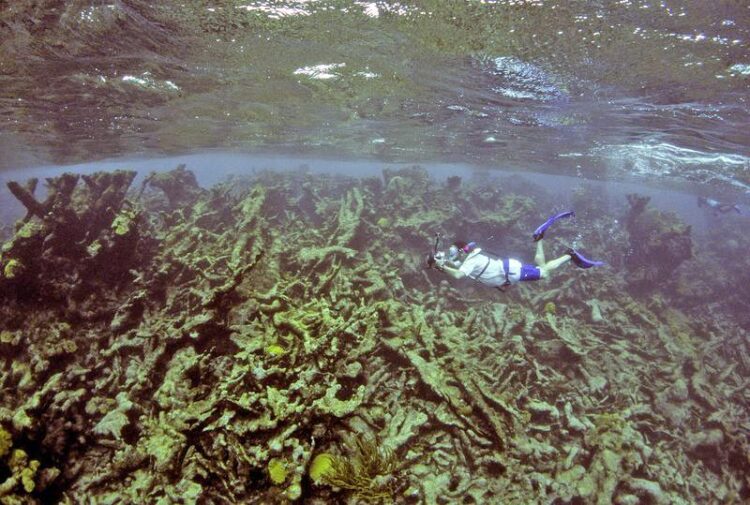 The elkhorn corals of this massive reef wall are completely dead. The decline of this tropical coral reef began in the 1970s. In the Caribbean, 80% of the coral population has been lost in the last 40 years.
Credit: Richard Ross / Secore international / www.ICRS2022.de

More than 1,000 scientists from over 80 countries will discuss the world’s most important event for coral reefs in Bremen. Host of the 15th International Coral Reef Symposium is the University of Bremen. The conference is being held in Europe for the first time in its more than 50-year history. The focus is on the major threats facing coral reefs and possible solutions to secure the future of these ecosystems.

The world remains in a deep coral reef crisis. The existence of these ecosystems is threatened. Globally, 30 percent of all coral reefs are so severely damaged that recovery is unlikely, at least another 50 percent are massively threatened, and only less than 20 percent remain in comparatively good condition. The main causes are climate change, overfishing, and pollution of the oceans.

The 15th ICRS (International Coral Reef Symposium), which takes place from July 3 to 8, will focus on these current and future threats. An important goal of the more than 1,000 participants from over 80 countries is to find solutions to the coral reef crisis. Tuesday, July 5, is therefore “Solutions Day.” All events on this day are dedicated to ways out of the crisis.

Federal Minister for the Environment Steffi Lemke said at the opening: “In order to conserve and better protect coral reefs worldwide, we need a global response and networking of stakeholders in politics, administration, and science. The framework for this is provided by the World Coral Reef Conference in Bremen. We face a triple challenge here: the climate crisis, the biodiversity crisis, and the pollution crisis. Therefore, a significant amount of work needs to be done to protect coral reefs alongside ambitious climate action. Germany is already committed to protecting these unique ecosystems as a member of the International Coral Reef Initiative and as part of the International Climate Initiative.”

Bremen Mayor Dr. Andreas Bovenschulte, President of the Senate, stressed: “The Free Hanseatic City of Bremen and the University of Bremen are very pleased that the 15th World Coral Reef Conference is being hosted in Europe for the first time in its history and that we have the great pleasure to welcome you – dear participants – here in Bremen. The state of Bremen is a globally recognized top location for marine and climate sciences and the largest German marine research location. Around 40 percent of all marine researchers active in Germany work here. We are very proud of this, because Bremen’s research institutions are helping to find solutions to the major global climate issues and to save the threatened seas and oceans. My sincere thanks go to Professor Christian Wild’s team of organizers at the University of Bremen. On behalf of the Bremen Senate, I wish you all a successful conference.”

Bremen’s Senator for Science and Ports, Dr. Claudia Schilling, said at the opening: “The International Coral Reef Symposium (ICRS) is the largest marine research conference ever held in Germany. The World Coral Reef Conference is being held in Europe for the first time. Bremen was chosen as the venue for good reason, as it has a very active and visible community of excellent coral reef researchers. Several partner institutions, most of them in close proximity to each other on the campus of the University of Bremen, are active in coral reef research such as the Center for Environmental Research and Sustainable Technologies (UFT), MARUM, the Max Planck Institute for Marine Microbiology (MPIMM), the Leibniz Center for Tropical Marine Research (ZMT), and the Alfred Wegener Institute, Helmholtz Centre for Polar and Marine Research (AWI). They thus make the state of Bremen a central hub of coral reef research in Europe and beyond.”

Professor Christian Wild from the University of Bremen, who is organizing the event with his team, elaborated on the goals of the symposium: “The overarching goals of the 15th ICRS are to share the latest research findings related to coral reefs and recommend science-based solutions to the coral reef crisis to decision makers, reef managers, and the public.” He added that it is precisely because of such an outcome-oriented approach that this conference is so vital. “And the sooner we tackle these solutions, the better. It is important to us to use the ICRS to keep as many people as possible well informed about the problems threatening the existence of coral reefs.” Bremen is the first European location to host a World Coral Reef Conference in the event’s more than 50-year history. “We are proud that Bremen has received this honor,” said Professor Wild.

Coral Reefs are at a Tipping Point

International Coral Reef Society President Professor Andréa Grottoli highlighted the importance of coral reefs: “Coral reefs are not only an important marine ecosystem, home to more than 25 percent of the oceans’ species, but they also provide vital services to humans – such as coastal protection from storms and sea level rise, fisheries as well as medical products – and are critical to the tourism industry.” Coral reefs are at a tipping point, he said, due to the effects of climate change and local stress factors such as pollution and overfishing, potentially leading them to be irreversibly damaged. “As scientists, we must race against time to find solutions regarding the protection and restoration of coral reefs in order to provide a temporary stopgap and to preserve enough coral reefs in the coming decades while addressing the climate crisis.” Ultimately, coral reef protection and restoration must go hand in hand with aggressive mitigation of CO2 emissions and curbing local stress factors such as pollution and overfishing,” Professor Grottoli urged.

First Plenary Speaker and recipient of the prestigious Darwin Medal, the International Coral Reef Society’s highest honor, Professor Nancy Knowlton emphasized: “While the coral reef situation is becoming more urgent, it is by no means hopeless. Three top action priorities are required: reducing threats from climate change, improving local conditions to build reef resilience, and investing in active restoration to recover some of what we’ve lost.”

The International Coral Reef Symposium (ICRS) is by far the most important event dealing with coral reef ecosystems. Since 1967, individuals from science, coastal management, environmental protection, and politics have been meeting every four years to present their latest research results. The 15th ICRS in Bremen is the first ICRS to be conducted in a climate-neutral manner. This goal was achieved through a comprehensive and two-step green strategy. Carbon dioxide emissions on-site were minimized. And the unavoidable carbon dioxide emissions, mainly caused by the participants’ travel, are offset by supporting a range of marine climate protection projects. Professor Wild stated: “We are very proud that our green strategy has been so successful. Coral reefs are early-warning systems for climate change, so it is especially important that coral reef events do not contribute to climate change. Many thanks to the United Nations Environment Programme, which has been instrumental in supporting our green strategy.”

Bremen has a wealth of expertise in marine research and an excellent network of partners. Researchers in oceanography and environmental physics, marine geosciences, marine biology, and marine chemistry work together in an interdisciplinary manner at the University of Bremen, the adjacent nonuniversity research institutions in the Bremen Technology Park, and throughout the region. Marine research also incorporates the areas of law, social sciences, and humanities. Marine, Polar, and Climate Research is a high-profile area at the University of Bremen, which it strategically promotes. MARUM – Center for Marine Environmental Sciences at the University of Bremen is home to the Excellence Cluster “The Ocean Floor – Unexplored Interface of the Earth.” Here, researchers cooperate closely with institutions in the region and with international partners as well.

So much diverse expertise at one location is unique in the marine sciences in Germany and prevalent in very few locations worldwide. This is evident, for example, in the area of coral research. “It was important to me to involve all Bremen facilities working on coral reefs for the organization of the 15th World Coral Reef Conference,” adds Professor Christian Wild. Various stakeholders of the University of Bremen are taking part and representatives of the following institutions have accepted the invitation and contributed to the organization of the 15th ICRS – such as the BreMarE Center for Marine Ecology and MARUM – Center for Marine Environmental Sciences at the University of Bremen. In addition, nonuniversity research institutions from the state of Bremen are also working on coral reefs, including the Leibniz Centre for Tropical Marine Research (ZMT), the Max Planck Institute for Marine Microbiology (MPI), and the Alfred Wegener Institute, Helmholtz Centre for Polar and Marine Research (AWI) in Bremerhaven. They have all helped bring together the International Coral Reef Symposium (ICRS) in Bremen.

The conference will be accompanied by an extensive framework program of exhibitions, lectures, and films. Information on the program is found at: https://www.icrs2022.de/program/event-program