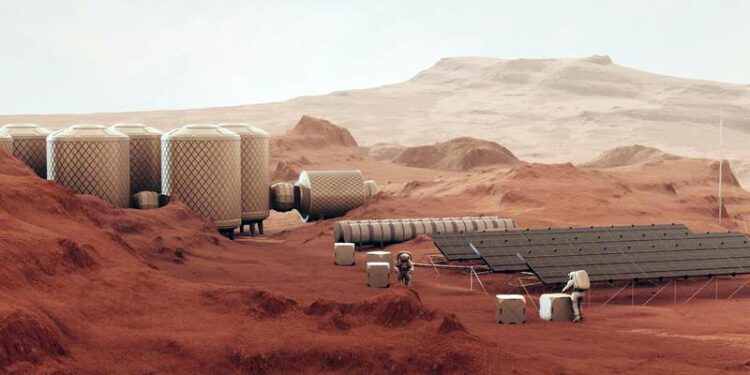 Is sustainable human exploration of Mars possible? What are the challenges on the ground and what impact will they have on us humans? Conversely, how will humans affect the new environment? And can Mars teach us lessons for Earth? As part of the “Humans on Mars” initiative, 60 researchers from the University of Bremen and other Bremen research institutes are investigating these very questions.

On July 8, 2022, the University of Bremen is set to launch its large-scale initiative “Humans on Mars – Pathways Toward a Long-Term Sustainable Exploration and Settlement of Mars.” Around 60 researchers from eight faculties are working together to address the question of how concepts for long-term, sustainable human exploration and colonization of Mars might look.

This initiative is not about technological feasibility – such as designing a suitable spacecraft for the long flight there. Instead, the focus is on people and the complex challenges they are likely to face on the ground. Equally important is the question of its effects – on the pristine environment of Mars and, not least, on our dealings with Earth.

The Importance of the Initiative:

“Current efforts around the world are unstoppably aimed at flying humans to Mars in the foreseeable future. With our research, we want to show ways in which a permanent human presence on Mars can provide long-term benefits for mankind and at the same time be done with careful consideration for the red planet,” explains Professor Marc Avila, spokesman for the Humans on Mars initiative and director of the Center for Applied Space Technology and Microgravity (ZARM) at the University of Bremen.

The Bremen initiative differs from the primary objectives of space agencies and private companies also working to implement Mars missions. Often, the focus there is solely on technology and the survival of astronauts on Mars – which means an immense impact on the planet’s environment. “Our interdisciplinary research approach is therefore essential for the “Humans on Mars” initiative. This is the only way to develop radically new solutions to meet the extreme demands of life and survival on Mars,” explains Avila. “The goal is to replace the current paradigm of productivity with one of sustainability.”

Specifically, the scientists will deal with the following questions: How can human settlements become autonomous and self-sufficient under the extreme, even hostile, environmental conditions on Mars? What might new processes that address the extreme energy and resource scarcity on Mars look like? Could dangerous space radiation possibly be used to generate energy? How is a micro-society with artificially intelligent systems and machines in its midst formed, and how will its relationship with humans on Earth develop over the long term?

“Environmental protection” is a priority: What tradeoffs are possible between colonization and human intervention on the one hand, and the integrity of the new environment and Martian atmosphere on the other? And last but not least: Can we transfer the findings from the more responsible use of resources, which are even scarcer on Mars than on Earth, to our planet as well – in other words, learn from Mars for Earth?

The initiative is supported by the state of Bremen. The impetus and leadership for “Humans on Mars” comes from the high-profile area of MAPEX Center for Materials and Processes at the University of Bremen. About 60 scientists from eight faculties of the University of Bremen are involved. Nonuniversity research institutes of the U Bremen Research Alliance such as the DLR Institute of Space Systems, the Fraunhofer Institute for Manufacturing Technology and Advanced Materials IFAM, the Leibniz Institute for Materials Oriented Technologies IWT, and the German Research Center for Artificial Intelligence GmbH (DFKI) are closely involved.

To the Launch Event:

At the launch event on July 8, 2022, at the Haus der Wissenschaft in Bremen, all participating researchers are expected to present their respective subprojects within the framework of the “Humans on Mars” initiative. The event will be inaugurated, among others, with a welcome address by Dr. Claudia Schilling, Senator for Science and Ports of the Free Hanseatic City of Bremen, and Professor Bernd Scholz-Reiter, President of the University of Bremen.