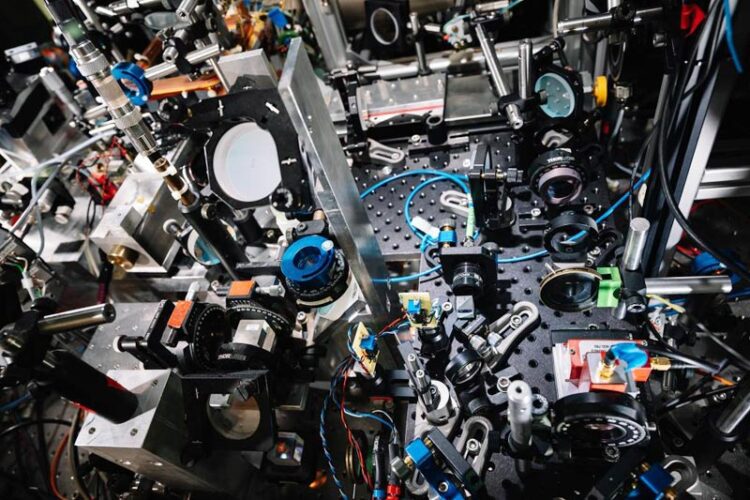 Experimental setup for the demonstration of the coexistence of superfluids in ultracold atomic clouds in the “Synthetic Quantum Systems” research group. | © Florian Freundt (Heidelberg)

Two superfluids can exist at the same time in ultracold atomic clouds. Until now, their coexistence could not be observed experimentally. Now, however, physicists from Heidelberg University have demonstrated such a magnetic quantum fluid – it is fluid in two ways – in an atomic gas. Researchers led by Prof. Dr Markus Oberthaler have succeeded in preparing this state in clouds of ultracold rubidium atoms and to characterise it in detail. The results of their research were published in the journal “Nature Physics”.

Fluids as we know them from daily life do not flow without resistance. Large pumps and turbines are needed to move water, and honey flows slowly off a spoon. This is caused by the fluid’s inner friction, through which motional energy is ultimately converted into heat. This can be radically different in a quantum fluid – something that is closely linked to the phenomenon of Bose-Einstein condensation.

A Bose-Einstein condensate (BEC) is a special quantum mechanical state of an atomic gas that is reached at very cold temperatures. A cloud of individual atoms in this state collectively behaves as a single fluid. This quantum fluid is able to flow without resistance – it is superfluid. According to Prof. Oberthaler, in recent decades atomic Bose-Einstein condensates were created from very different types of atoms such as sodium and rubidium, but more recently also from more “exotic” atoms like erbium and dysprosium.

However, most of these atoms also exhibit internal degrees of freedom – they have a spin and behave like small magnets. This can, in principle, also give rise to the phenomenon of Bose-Einstein condensation, but this has not been experimentally observed yet, as Markus Oberthaler, a researcher at the Kirchhoff Institute for Physics, explains. This demonstration has now become possible with an ultracold cloud of rubidium atoms.

Usually, a Bose-Einstein condensate is prepared through so-called evaporative cooling. This works much like the cooling of coffee in a cup by blowing on it. The fastest atoms at the surface of the coffee are blown away and one waits until the remaining atoms come to rest at a cooler temperature. This is extremely difficult for the spin, which is why the Heidelberg physicists chose another method.

“We initialised the system far from equilibrium and waited until the rubidium atoms reached a new state of equilibrium. What at first seemed less intuitive turned out to be extremely efficient,” states Dr Maximilian Prüfer. The study’s lead author was a member of Prof. Oberthaler’s research group and is now with TU Wien (Austria).

To create and trace this state, the researchers used unique detection and perturbation methods especially developed for this purpose. They observed that not only did the motional degree of freedom become superfluid but the spin as well. Magnetic quantum fluids can thereby become extremely fluid in two ways. “Our new research methods allow us not only to characterise the condensate but will also allow us to better understand the path from non-equilibrium to that state,” explains Markus Oberthaler, head of the “Synthetic Quantum Systems” research group, which is also part of the STRUCTURES Cluster of Excellence of Heidelberg University.

The experimental physicists collaborated with the research group of Prof. Dr Jürgen Berges at the Institute for Theoretical Physics to calculate the theoretical predictions for the experimental observables. To achieve agreement between the calculations and the results of the experiment, an extremely cold temperature had to be assumed. “That surprised us all and will be the topic of further investigations for independent verification,” state the authors of the “Nature Physics” paper.

The work was conducted as part of Collaborative Research Centre 1225, “Isolated Quantum Systems and Universality in Extreme Conditions” (ISOQUANT) of Heidelberg University.