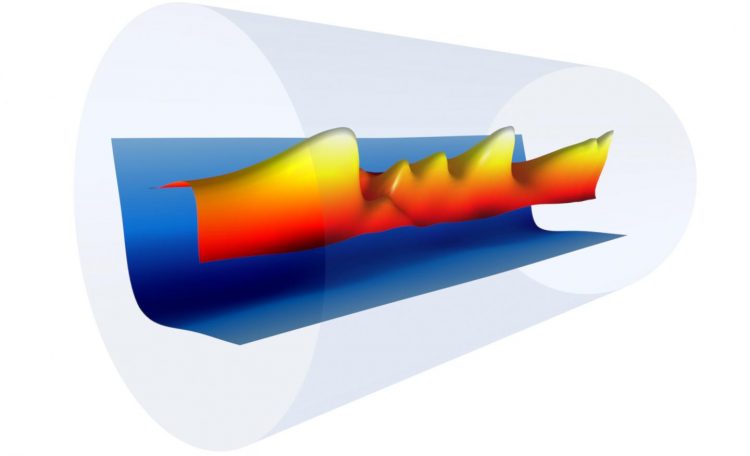 Combining a first laser pulse to heat up and “drill” through a plasma, and another to accelerate electrons to incredibly high energies in just tens of centimeters, scientists have nearly doubled the previous record for laser-driven particle acceleration.

The laser-plasma experiments, conducted at the Department of Energy's Lawrence Berkeley National Laboratory (Berkeley Lab), are pushing toward more compact and affordable types of particle acceleration to power exotic, high-energy machines – like X-ray free-electron lasers and particle colliders – that could enable researchers to see more clearly at the scale of molecules, atoms, and even subatomic particles.

The new record of propelling electrons to 7.8 billion electron volts (7.8 GeV) at the Berkeley Lab Laser Accelerator (BELLA) Center surpasses a 4.25 GeV result at BELLA announced in 2014. The latest research is detailed in the Feb. 25 edition of the journal Physical Review Letters. The record result was achieved during the summer of 2018.

The experiment used incredibly intense and short “driver” laser pulses, each with a peak power of about 850 trillion watts and confined to a pulse length of about 35 quadrillionths of a second (35 femtoseconds). The peak power is equivalent to lighting up about 8.5 trillion 100-watt lightbulbs simultaneously, though the bulbs would be lit for only tens of femtoseconds.

Each intense driver laser pulse delivered a heavy “kick” that stirred up a wave inside a plasma – a gas that has been heated enough to create charged particles, including electrons. Electrons rode the crest of the plasma wave, like a surfer riding an ocean wave, to reach record-breaking energies within a 20-centimeter-long sapphire tube.

“Just creating large plasma waves wasn't enough,” noted Anthony Gonsalves, the lead author of the latest study. “We also needed to create those waves over the full length of the 20-centimeter tube to accelerate the electrons to such high energy.”

To do this required a plasma channel, which confines a laser pulse in much the same way that a fiber-optic cable channels light. But unlike a conventional optical fiber, a plasma channel can withstand the ultra-intense laser pulses needed to accelerate electrons. In order to form such a plasma channel, you need to make the plasma less dense in the middle.

In the 2014 experiment, an electrical discharge was used to create the plasma channel, but to go to higher energies the researchers needed the plasma's density profile to be deeper – so it is less dense in the middle of the channel. In previous attempts the laser lost its tight focus and damaged the sapphire tube. Gonsalves noted that even the weaker areas of the laser beam's focus – its so-called “wings” – were strong enough to destroy the sapphire structure with the previous technique.

Eric Esarey, BELLA Center Director, said the solution to this problem was inspired by an idea from the 1990s to use a laser pulse to heat the plasma and form a channel. This technique has been used in many experiments, including a 2004 Berkeley Lab effort that produced high-quality beams reaching 100 million electron volts (100 MeV).

Both the 2004 team and the team involved in the latest effort were led by former ATAP and BELLA Center Director Wim Leemans, who is now at the DESY laboratory in Germany. The researchers realized that combining the two methods – and putting a heater beam down the center of the capillary – further deepens and narrows the plasma channel. This provided a path forward to achieving higher-energy beams.

The combined technique radically improved the confinement of the laser beam, preserving the intensity and the focus of the driving laser, and confining its spot size, or diameter, to just tens of millionths of a meter as it moved through the plasma tube. This enabled the use of a lower-density plasma and a longer channel. The previous 4.25 GeV record had used a 9-centimeter channel.

The team needed new numerical models (codes) to develop the technique. A collaboration including Berkeley Lab, the Keldysh Institute of Applied Mathematics in Russia, and the ELI-Beamlines Project in the Czech Republic adapted and integrated several codes. They combined MARPLE and NPINCH, developed at the Keldysh Institute, to simulate the channel formation; and INF&RNO, developed at the BELLA Center, to model the laser-plasma interactions.

“These codes helped us to see quickly what makes the biggest difference – what are the things that allow you to achieve guiding and acceleration,” said Carlo Benedetti, the lead developer of INF&RNO. Once the codes were shown to agree with the experimental data, it became easier to interpret the experiments, he noted.

“Now it's at the point where the simulations can lead and tell us what to do next,” Gonsalves said.

Benedetti noted that the heavy computations in the codes drew upon the resources of the National Energy Research Scientific Computing Center (NERSC) at Berkeley Lab. Future work pushing toward higher-energy acceleration could require far more intensive calculations that approach a regime known as exascale computing.

“Today, the beams produced could enable the production and capture of positrons,” which are electrons' positively charged counterparts, said Esarey.

He noted that there is a goal to reach 10 GeV energies in electron acceleration at BELLA, and future experiments will target this threshold and beyond.

“In the future, multiple high-energy stages of electron acceleration could be coupled together to realize an electron-positron collider to explore fundamental physics with new precision,” he said.

Also participating in this research were researchers from UC Berkeley and the National Research Nuclear University in Russia.

This work was supported by the Department of Energy's Office of Science, the Alexander von Humboldt Foundation, and the National Science Foundation.