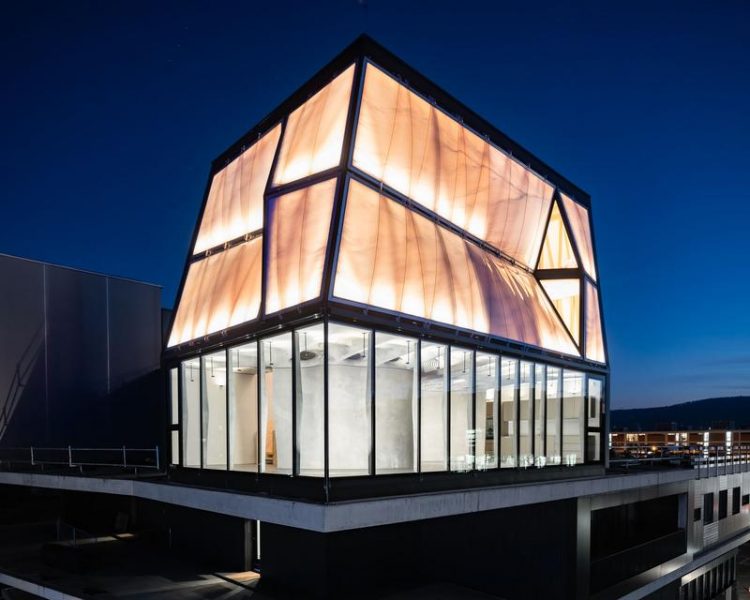 Within DFAB HOUSE, for the first time, six novel digital building processes have been transferred from research to architectural application. Photo: Roman Keller

A delicate concrete ceiling – cast in 3D-printed formwork – and a curved concrete wall created by a construction robot characterize the architecture of the living room, whose aesthetics are remotely reminiscent of the film sets of the Swiss artist HR Giger (the creator of “Alien”).

Upon saying a specific command, the blinds open as if by magic and the kettle prepares water for tea. What sounds like a science fiction film is reality in Dübendorf: today, the smart and largely digitally planned and built DFAB HOUSE opens its doors.

From laboratory to architectural application

The three-story “house” is located on the uppermost of three platforms at NEST. On this modular research and innovation building of Empa and Eawag, researchers, together with industrial partners, can test new construction and energy technologies under real-life conditions.

NEST consists of a central building core, to which various building modules – so-called units – can dock. For the construction of the DFAB HOUSE unit, researchers from eight professorships at ETH Zurich, within the framework of the National Center of Competence in Research (NCCR) “Digital Fabrication”, in collaboration with industrial partners, have for the first time transferred several novel digital construction technologies from the laboratory into real-world applications (see Factsheet Digital Fabrication).

The aim of digital technologies is not only to make planning and construction more efficient, but also more sustainable. For example, the digitally planned floor slab of DFAB HOUSE is statically and structurally optimized in such a way that considerable amounts of material can be saved compared to a conventional concrete slab. The technologies also open up new design possibilities.

For instance, the two upper residential floors are characterized by wooden frames, which were fabricated with the help of two construction robots and arranged in complex geometries. “The architectural potential of digital fabrication technologies is immense. Unfortunately, these technologies are still scarcely used on construction sites. With the DFAB HOUSE, we are able to test new technologies hand in hand with industry and thus accelerate the transfer from research to practice,” says Matthias Kohler, ETH Professor of Architecture and Digital Fabrication.

In around two months' time, the first residents, academic guests from Empa and Eawag, will move into DFAB HOUSE. At DFAB HOUSE, they will live in an intelligent home. A consortium of companies led by digitalSTROM has installed the first smart home solutions in DFAB HOUSE (see Factsheet Digital Living), which are based on the manufacturer-independent digitalSTROM platform. These include intelligent, multi-stage burglar protection, automated glare and shading options, and the latest generation of networked, intelligent household appliances.

However, DFAB HOUSE is smart not only in terms of home electronics, but also in terms of energy management: Photovoltaic modules on the roof supply on average one and a half times as much electricity as the unit itself will consume, while an intelligent control system coordinates all consumption and ensures that no load peaks occur.

Two start-up ideas, accompanied by researchers from Empa and Eawag, are helping to save additional energy: On the one hand, heat from waste water, which would otherwise be lost, is recovered directly in the shower trays via heat exchangers, and on the other hand hot water flows from the pipes back into the boiler when not in use instead of cooling in the water pipes. This method not only saves energy and water, but also reduces the risk of bacteria growing in the pipes.

Research and industry learn from each other

The sixth unit in the NEST research and innovation building is a good example of how cooperation between researchers and industry can produce forward-looking solutions. “In implementing a construction project like DFAB HOUSE, traditional construction methods meet new concepts of the digital world. The path from the digital drawing board to an actual building has challenged both scientists and experts from industry. Through a constructive dialog, something truly visionary can now be put into practice; hopefully it will soon be used broadly in the construction industry,” says Empa CEO Gian-Luca Bona.

We play ping pong with the tree