Ice on the spin liquid 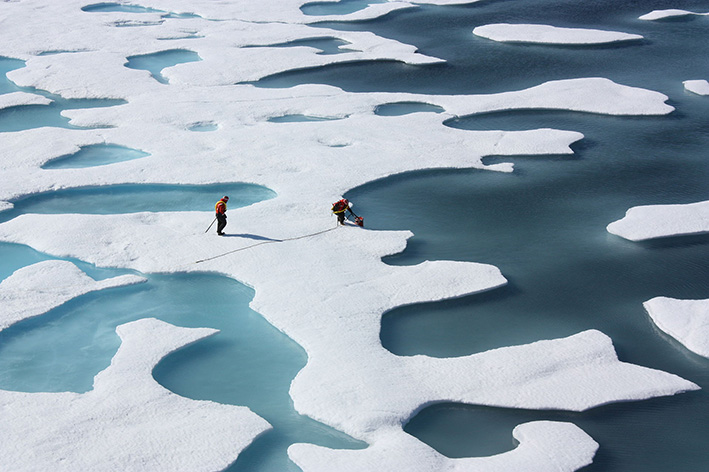 Like ice and water coexist in the Arctic, frozen and dynamic spins cast the unusual magnetic state of pressurized -Li2IrO3 above 1.4 GPa manifesting a novel regime of the spin-liquid physics. Kathryn Hansen / NASA photo / Alaska Dispatch

Macroscopic analogies go a long way in elucidating magnetic phenomena. Magnetic moments in solids can be usually thought of as being in the crystalline (ordered) or gaseous (disordered) states. Intermediate liquid-like states prove to be rare.

The researchers from the Chair of Experimental Physics VI/EKM in Augsburg, in collaboration with the University of Bayreuth, IFW Dresden, and Paul Scherrer Institute (Switzerland), report in Physical Review Letters on a novel liquid-like state intermixed with static spins, a magnetic analog of a freezing liquid.

Three common states of matter – gas, liquid, and solid – have close analogs in magnetism. At high temperatures, magnetic moments fluctuate randomly, similar to molecules in gas. At low temperatures, atoms in crystals become ordered, and so do magnetic moments that produce magnetic order, with ferromagnets being a prominent example.

The analogy between ordinary and magnetic liquids is less straight-forward, because ordinary liquids solidify upon cooling, whereas the most interesting magnetic (spin) liquids are those that do not. They preserve spin dynamics down to zero temperature, but a less direct analogy with ordinary liquids still exists. Crystalline solids are good construction materials.

Just like water ice can be carved into ice sculptures, ferromagnets are used to build large-scale devices, such as electric motors. In contrast, liquid water is not a material to build from, but it is central to life, whereas spin liquids can be vital to new technologies, thanks to their special properties that no other system exhibits.

Routes to the spin liquid

Spin liquids are notoriously hard to find. Theory suggests several recipes, but only a few of them made their way into the lab. In 2006, Alexei Kitaev from Caltech conceived a special magnetic model that hosts a new class of spin-liquid states having properties needed for topological quantum computing and novel information technologies. Many groups rushed to realize his scenario experimentally.

To their dismay, even those magnets that contained all necessary ingredients of the Kitaev model failed to show the anticipated spin-liquid state, i.e., at low temperatures the magnetic moments formed the unwanted “crystalline” long-range-order.

The team from Augsburg could overcome this difficulty by applying pressure. “Pressure tweaks the atomic positions and changes interactions between the atoms. Magnetic interactions are especially sensitive to compression”, says Dr. Alexander Tsirlin, the group leader at the Chair of Experimental Physics VI/EKM in Augsburg. The group led by Tsirlin and Prof. Philipp Gegenwart chose one of the candidate Kitaev materials, -polymorph of the ternary oxide Li₂IrO₃, and used pressures of about 1.5 GPa, which is 15,000 times atmospheric pressure and equivalent to loading the weight of 15 tons onto a surface of 1 cm2.

Several experiments were performed. A miniature pressure cell was placed inside the magnetometer for a direct measurement of the sample magnetization. Additionally, the sample was bombarded with short-lived positively charged elementary particles, muons, which probe the development of the local magnetic field. The result of these experiments was unexpected. While the magnetic long-range order was suppressed, and the liquid-like state of spins appeared, it happened to coexist with frozen spins. The group interpreted this result as the formation of ice on the spin liquid.

The freezing of a spin liquid can be caused by imperfections of the material, but that does not seem to be the case here. The group performed a meticulous characterization of the crystal structure before, during, and after the pressure treatment, and they did not notice any defects developing. “The coexistence of dynamic and static spins seems to be generic for pressurized -Li₂IrO₃”, says Prof. Philipp Gegenwart, head of the Chair of Experimental Physics VI/EKM. “What we don’t know yet is whether static spins form clusters, like icebergs in the ocean, or encompass the regions of the spin liquid, like ice covering the water surface,” caveats Dr. Tsirlin. “The spin liquid we got seems different from the one predicted by Kitaev. We are now in touch with theorists and seek to analyze further implications of this novel mixed state.”