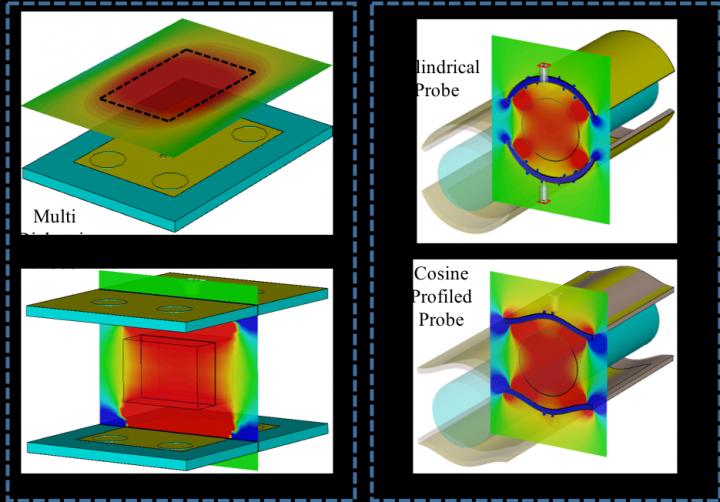 How can you make a high-frequency MRI machine more precise? By taking an electrical engineering approach to creating a better, uniform magnetic field.

“When frequencies become higher, wavelengths become shorter, and your magnetic field loses uniformity,” says Elena Semouchkina, an associate professor of electrical and computer engineering at Michigan Tech. “Uniformity is important for high resolution images, so we proposed a new approach to developing these probes.”

Semouchkina explains that kind of antenna that you see on the top of a building isn't quite the same thing used here, but instead, the team's design was inspired by microstrip patch antenna (MPA). The design is relatively simple: MPAs are made of a flat piece of metal grounded by a larger piece of metal. They're cheap, simple, and easy to make, which is why they're so often used in telecommunications.

MRIs work by issuing radio frequency pulses in a magnetic field via probes with coils or bird-cage like structures. That's then used to create an image.

But those conventional coils have frequency limits: too high and they can't create uniformed magnetic fields at the volume researchers need.

MPAs are an alternative where waves oscillate in the cavity formed between the patch and ground plane electrodes, which are accompanied by currents in the patch electrode and, respectively, oscillating magnetic fields around the patch, providing a magnetic field that is both even and strong.

“While the complexity of birdcage coils increases with the increase in operation frequency, patch-based probes can provide quality performance in the higher microwave range while still having a relatively simple structure,” Semouchkina says. They also showed smaller radiation losses, making them competitive with, even better, than conventional coils.

Because of the damage high-frequency radio waves cause to humans, the study was limited to high frequency machines–not the metal tube that we're used to seeing in hospitals and medical centers. Humans can only sustain frequencies up to seven Teslas, but ultrahigh fields up to 21.1 Teslas can be used in testing on animal models, and in tissue samples.

Semouchkina is already known for her work involving invisibility cloaks, which involve redirecting electromagnetic waves around an area to hide an object. “We use some of the same approaches that we developed in cloaking devices here, like making antenna smaller,” she said.

This study was conducted with Navid P. Gandji and George Semouchkin of Michigan Tech and Gangchea Lee, Thomas Neubereger and Micheal Lanagan of Pennsylvnia State University. The team's next step is to keep applying electrical engineering to modify those probes to make them work better, and to further expand the possibilities for high-frequency MRI machines, and the images they create.