Fuel for the black hole 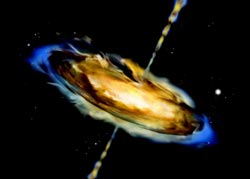 The use of near-infrared interferometry allowed the team to resolve a ring-shaped dust distribution (generally called “dust torus”) in the inner region of the nucleus of the active galaxy NGC 3783. This method is able to achieve an angular resolution equivalent to the resolution of a telescope with a diameter of 130 Meters. The resolved dust torus probably represents the reservoir of gaseous and dusty material that “feeds” the hot gas disk (“accretion disk”) and the supermassive black hole in the center of this galaxy.

Observations of these dust tori are very challenging since their sizes are very small. A giant telescope with a mirror diameter of more than 100 Meters would be able to provide the required angular resolution, but unfortunately telescopes of this size will not be available in the near future. This raises the question: Is there an alternative approach that provides the high resolution required?

The solution is to simultaneously combine (“interfere”) the light from two or more telescopes since these multi-telescope images, which are called interferograms, contain high-resolution information. In the reported NGC 3783 observations, the AMBER interferometry instrument was used to combine the infrared light from two or three telescopes of ESO's Very Large Telescope Interferometer (VLTI, see Fig. 2). This interferometric method is able to achieve an extreme angular resolution that is proportional to the distance between the telescopes. Since the largest distance between the four telescopes of the VLTI is 130 Meters, an angular resolution is obtained that is as high as the theoretical resolution of a telescope with a mirror diameter of 130 Meters – a resolution that is 15 times higher than the resolution of one of the VLTI telescopes, which have a mirror diameter of 8 Meters.

“The ESO VLTI provides us with a unique opportunity to improve our understanding of active galactic nuclei,”, says Gerd Weigelt from the Max-Planck-Institut für Radioastronomie in Bonn. “It allows us to study fascinating physical processes with unprecedented resolution over a wide range of infrared wavelengths. This is needed to derive physical properties of these sources.”

And Makoto Kishimoto emphasizes: “We hope to obtain more detailed information in the next few years by additional observations at shorter wavelengths, with longer baselines, and with higher spectral resolution. Most importantly, in a few years, two further interferometric VLTI instruments will be available, which can provide complementary information.”

To resolve the nucleus of the active galaxy NGC 3783, the research team recorded thousands of two- and three-telescope interferograms with the VLTI. The telescope distances were in the range of 45 to 114 Meters. The evaluation of these interferograms allowed the team to derive the radius of the compact dust torus in NGC 3783. A very small angular torus radius of 0.74 milli-arcsecond was measured, which corresponds to a radius of 0.52 light years. These near-infrared radius measurements, together with previously obtained mid-infrared measurements, allowed the team to derive important physical parameters of the torus of NGC 3783.

“The high resolution of the VLTI is also important for studying many other types of astrophysical key objects”, underlines Karl-Heinz Hofmann. “It is clear that infrared interferometry will revolutionize infrared astronomy in a similar way as radio interferometry has revolutionized radio astronomy.”

The research team comprises scientists from the Universities of Florence, Grenoble, Nice, Santa Barbara, and from the MPI für Radioastronomie.