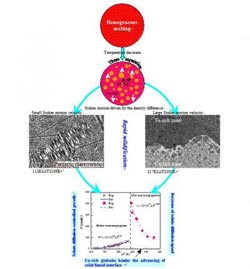 It provides an effective approach for the synthesis or processing of various kinds of advanced materials. Professor WEI Bingbo and his group from the Department of Applied Physics, Northwestern Polytechnical University (NPU), in Xi'an, China, have demonstrated novel dual solidification mechanisms for a ternary Fe47.5Cu47.5Sn5 peritectic-type alloy. Their work, entitled “Dual Solidification Mechanisms of Liquid Ternary Fe-Cu-Sn Alloy”, was published in SCIENCE CHINA Physics, Mechanics & Astronomy. 2012; 55 (3): 450-459.

A ternary Fe47.5Cu47.5Sn5 alloy was rapidly solidified under bulk undercooling conditions. Two distinct solidification mechanisms for a ternary Fe47.5Cu47.5Sn5 alloy were noted under these conditions: peritectic solidification at moderate undercoolings below 196K, and macroscopic phase separation at greater undercoolings, which is shown in Fig.1. The alloy's microstructures consisted of an aFe solid solution, a (Cu) solid solution, and a b-Cu5.6Sn intermetallic compound. At small undercoolings such as DT=112K, a homogeneous macrostructure and only about 0.1% volume of a Cu-rich zone at the sample bottom were formed. As the bulk undercooling increased to 196K, liquid phase separation proceeded to a larger extent; this resulted in the Cu-rich zone taking up about 7% of sample volume.
Macrosegregation took place when undercooling exceeded 196K. In this case, the homogeneous alloy was separated into an Fe-rich zone floating up to the sample top and a Cu-rich zone descending down to the sample bottom. The Cu-rich zone maintained a slightly decreasing volume fraction of (from 53% down to -47%) in the still greater undercooling range of 246�K. The progression of macrosegregation was found to depend also on the time interval allowed for phase separation. When the phase separation time Dtps

The Stokes motion driven by the density difference between the Fe-rich and Cu-rich liquid phases plays the dominant role in the progression of macroscopic segregation. As the thermodynamic barrier against the nucleation of a secondary liquid phase is usually much smaller than in the case of solid phase nucleation, a great number of Fe-rich and Cu-rich globules can be formed in the liquid phase. Once the size of an individual globule becomes sufficiently large, its Stokes motion prevails over all other kinds of movement. The calculated results show that the Stokes motion velocity increases rapidly along with an increase in globule size. A small Fe-rich globule with a 10mm radius displays a moving velocity of only 8.1mm/s in the alloy sample undercooled by 305K, while a large globule with a 100mm radius achieves a floating velocity of 805.5mm/s. Considering that the phase separation time Dtps of this alloy sample attains 11.8s, the large globules can float for a distance of 9.5mm. Such a moving distance covers the entire alloy sample, confirming that the Stokes motion is indeed responsible for the progression of macroscopic segregation.

The calculations also reveal that the Stokes motion velocity increases with bulk undercooling. The main reason for this lies in the fact that a greater bulk undercooling facilitates the achievement of macrosegregation and consequently leads to a larger density difference. It is evident that the subsequent solidification process of a macroscopically segregated Fe47.5Cu47.5Sn5 alloy should involve two successive stages: (1) the Fe-rich zone solidifies because of its higher liquidus temperature, and (2) the Cu-rich zone crystallizes at some lower temperatures T

Whether or not metastable phase separation occurs, the rapid dendritic growth of the primary gFe phase always induces a thermal recalescence effect. Since gFe dendrites spread quickly throughout he alloy sample in the course of recalescence, the alloy's growth velocity may be roughly measured as the ratio of the sample size divided by its recalescence time. As bulk undercooling increases from 112 to 236K, the actually measured dendritic growth velocity rises from 7.8 to 68.3mm/s. These results indicate that the primary dendritic growth of the gFe phase in a ternary Fe47.5Cu47.5Sn5 alloy is quite sluggish when compared to the dendtritic growth displayed by a similar Co-Cu-Ni alloy. One reason for this finding is that this Fe47.5Cu47.5Sn5 alloy has a broad solidification temperature range and hence its primary dendritic growth remains consistently in the regime of solute diffusion-controlled growth. On the other hand, the introdution of an Sn solute further suppresses the advancement of a solid/liquid interface.

Peritectic solidification requires a mutual reaction between the primary solid phase and the remnant liquid phase to form a new solid phase when the undercooling is below 196K. This is a typical solute diffusion-limited process, and it is rare for such a process to be completed. Two successive peritectic reactions are required for the successful completion of this process. First, primary gFe phase nucleates within the undercooled alloy must melt, grow dendritically, and react with the surrounding liquid phase to form the peritectic (Cu) phase, that is gFe+L®(Cu). This peritectic transformation is only partially fulfilled, resulting in the remains of many gFe dendrites that subsequently transform into the aFe phase. As a morphological feature of the peritectic product phase, a (Cu) solid solution always appears as haloes enveloping the dendritic fragments of the aFe phase. It is interesting to note that the (Cu) phase haloes often display two layers: an inner layer directly adjacent to the aFe phase that is designated as (Cu)i, and an outer layer marked as (Cu)o that surrounds the previous central part. This structural distinction results from the microsegregation of solutes within the peritectic (Cu) phase.

Next, as the undercooling increases, the macroscopic boundary between the Fe-rich and Cu-rich zones becomes gradually smooth and the gFe dendrites in the Fe-rich zone degenerate into an interconnected structure. (Cu) phase haloes appear around these decayed gFe dendrites, resulting from the peritectic reaction gFe+L®(Cu). The residual liquid phase then becomes so enriched with an Sn solute that the other peritectic transformation (Cu)+L®b-Cu5.6Sn is brought about in the Fe-rich zone. Thus, the white b-Cu5.6Sn intermetallic compound phase appears as the fillings of intergranular spacings between neighbouring (Cu) phase grains. Conversely, peritectic products are also characteristic of the solidified microstructures of the Cu-rich zone. The structural morphology of the Cu-rich zone is also typical of peritectic solidification. The peritectic (Cu) phase always envelops the fragments of primary gFe dendrites, whereas the peritectic b-Cu5.6Sn phase forms around the (Cu) phase in due sequence.

At the bulk undercooling of 305K, the Fe-rich zone and Cu-rich zone become clearly separated from each other during the phase separation time of 11.8s. It appears that the boundary between Fe-rich and Cu-rich zones has evolved into a sharp interface during this phase separation time. There are not discernible gFe dendrites in the Fe-rich zone, where (Cu) and b-Cu5.6Sn phases are distributed as dispersive particles inside an aFe phase matrix. The two sucessive peritectic transformations of the Cu-rich zone are gFe+L®(Cu) and (Cu)+L®b-Cu5.6Sn. As the remnant undercooling of the Cu-rich zone is still quite large at the end of the macroscopic phase separation process, the primary gFe phase can grow rapidly into well-branched dendrites.
EDS analyses have been performed on the solidification microstructures. Even at the small 112K undercooling, the aFe phase is found to contain 10.13 at%Cu and 0.27 at%Sn. Since the equilibrium solubility of Cu in the aFe phase is merely 1.9 at%Cu, this means that the aFe phase is highly supersaturated with a Cu element as a result of the solute trapping effect accompanying the rapid dendritic growth of the gFe phase. Both the inner and outer layers of the (Cu) phase possess roughly the same Fe content. However, they display quite different Sn contents: the (Cu)i layer has 9.11 at%Sn, whereas the (Cu)o layer dissolves only 5.47 at%Sn. The b-Cu5.6Sn intermetallic compound exhibits a remarkable Fe content of 4.02 at%Fe.