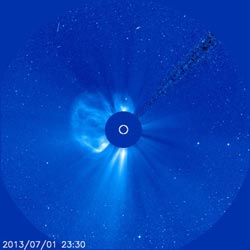 On July 1, 2013, the sun erupted with a coronal mass ejection, or CME – shown here as the lighter-colored gas moving off to the left -- which soared off in the direction of Venus and Mars. This image was captured by the joint ESA/NASA Solar and Heliospheric Observatory. <br>Image Credit: ESA and NASA/SOHO<br>

Experimental NASA research models based on NASA’s Solar Terrestrial Relations Observatory show that the CME was not Earth-directed and it left the sun at around 570 miles per second.

The CME may, however, pass by NASA’s Messenger, Spitzer and STEREO-B satellites, and their mission operators have been notified.

If warranted, operators can put spacecraft into safe mode to protect the instruments from the solar material.

Updates will be provided as needed.