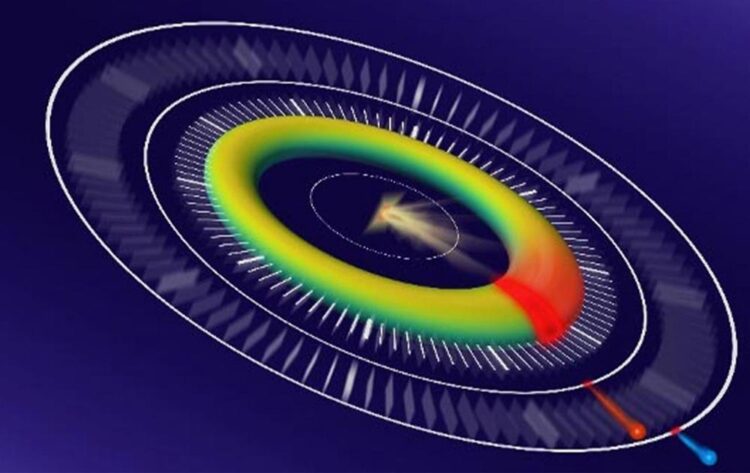 Artistic depiction of XFEL measurement with neon gas. The inherent delay between the emission of photoelectrons and Auger electrons leads to a characteristic ellipse in the analyzed data. In principle, the position of individual data points around the ellipse can be read like the hands of a clock to reveal the precise timing of decay processes.
Image by Daniel Haynes and Jörg Harms/Max Planck Institute for the Structure and Dynamics of Matter

A large international team of scientists from various research organizations, including the U.S. Department of Energy’s (DOE) Argonne National Laboratory, has developed a method that dramatically improves the already ultrafast time resolution achievable with X-ray free-electron lasers (XFELs). It could lead to breakthroughs on how to design new materials and more efficient chemical processes.

An XFEL device is a powerful combination of particle accelerator and laser technology producing extremely brilliant and ultrashort pulses of X-rays for scientific research. “With this technology, scientists can now track processes that occur within millions of a billionth of a second (femtoseconds) at sizes down to the atomic scale,” said Gilles Doumy, a physicist in Argonne’s Chemical Sciences and Engineering division. “Our method makes it possible to do this for even faster times.”

“It’s like trying to photograph the end of a race when the camera shutter might activate at any moment in the final ten seconds.” — Dan Haynes, doctoral student, Max Planck Institute for the Structure and Dynamics of Matter

One of the most promising applications of XFELs has been in the biological sciences. In such research, scientists can capture how biological processes fundamental to life change over time, even before the radiation from the laser’s X-rays destroys the samples. In physics and chemistry, these X-rays can also shed light on the fastest processes occurring in nature with a shutter speed lasting only a femtosecond. Such processes include the making and breaking of chemical bonds and the vibrations of atoms on thin film surfaces.

For over a decade XFELs have delivered intense, femtosecond X-ray pulses, with recent forays into the sub-femtosecond regime (attosecond). However, on these miniscule time scales, it is difficult to synchronize the X-ray pulse that sparks a reaction in the sample and the laser pulse that “observes” it. This problem is called timing jitter.

Lead author Dan Haynes, a doctoral student at the Max Planck Institute for the Structure and Dynamics of Matter, said, “It’s like trying to photograph the end of a race when the camera shutter might activate at any moment in the final ten seconds.”

To circumvent the jitter problem, the research team came up with a pioneering, highly precise approach dubbed “self-referenced attosecond streaking.” The team demonstrated their method by measuring a fundamental decay process in neon gas at the Linac Coherent Light Source, a DOE Office of Science User Facility at SLAC National Accelerator Laboratory.

Doumy and his advisor at the time, Ohio State University Professor Louis DiMauro, had first proposed the measurement in 2012.

In the decay process, called Auger decay, an X-ray pulse catapults atomic core electrons in the sample out of their place. This leads to their replacement by electrons in outer atomic shells. As these outer electrons relax, they release energy. That process can induce the emission of another electron, known as an Auger electron. Radiation damage occurs due to both the intense X-rays and the continued emission of Auger electrons, which can rapidly degrade the sample. Upon X-ray exposure, the neon atoms also emit electrons, called photoelectrons.

After exposing both types of electrons to an external “streaking” laser pulse, the researchers determined their final energy in each of tens of thousands of individual measurements.

“From those measurements, we can follow Auger decay in time with sub-femtosecond precision, even though the timing jitter was a hundred-times larger,” said Doumy. “The technique relies on the fact that Auger electrons are emitted slightly later than the photoelectrons and thus interact with a different part of the streaking laser pulse.”

This factor forms the foundation of the technique. By combining so many individual observations, the team was able to construct a detailed map of the physical decay process. From that information, they could determine the characteristic time delay between the photoelectron and Auger electron emission.

The researchers are hopeful that self-referenced streaking will have a broad impact in the field of ultrafast science. Essentially, the technique enables traditional attosecond streaking spectroscopy to be extended to XFELs worldwide as they approach the attosecond frontier. In this way, self-referenced streaking may facilitate a new class of experiments benefitting from the flexibility and extreme intensity of XFELs without compromising on time resolution.

The research was funded, in part, by the DOE Office of Basic Energy Sciences.

Parts of this article were adapted from “Clocking electron movements inside an atom,” Max Planck Institute for the Structure and Dynamics of Matter.