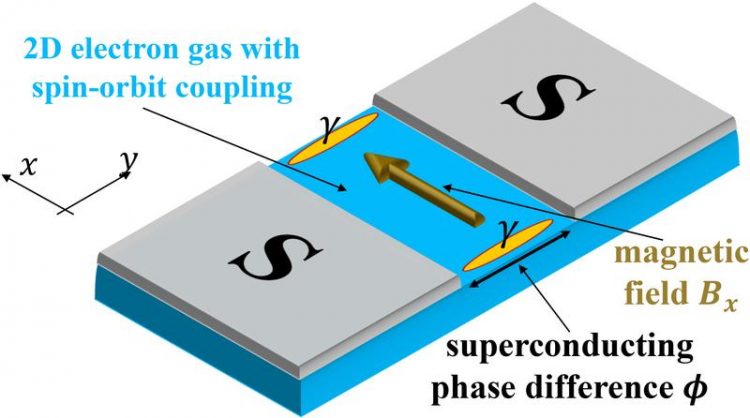 Majorana particles are very peculiar members of the family of elementary particles. First predicted in 1937 by the Italian physicist Ettore Majorana, these particles belong to the group of so-called fermions, a group that also includes electrons, neutrons and protons.

Majorana fermions are electrically neutral and also their own anti-particles. These exotic particles can, for example, emerge as quasi-particles in topological superconductors and represent ideal building blocks for topological quantum computers.

On the road to such topological quantum computers based on Majorana quasi-particles, physicists from the University of Würzburg together with colleagues from Harvard University (USA) have made an important step: Whereas previous experiments in this field have mostly focused on one-dimensional systems, the teams from Würzburg and Harvard have succeeded in going to two-dimensional systems.

In this collaboration, the groups of Ewelina Hankiewicz (Theoretische Physik IV) and Laurens Molenkamp (Experimentelle Physik III) from the University of Würzburg teamed up with the groups of Amir Yacoby and Bertrand Halperin from Harvard University. Their findings are presented in the current issue of the scientific journal Nature.

In order to avoid some of these difficulties, the researchers have studied Majorana fermions in a two-dimensional system with strong spin-orbit coupling. „The system we investigate is a so-called phase-controlled Josephson junction, that is, two superconductors that are separated by a normal region,“ Laurens Molenkamp explains. The superconducting phase difference between the two superconductors provides an additional knob, which makes an intricate fine-tuning of the other system parameters at least partially unnecessary.

Important step towards an improved control

In the material studied, a mercury telluride quantum well coupled to superconducting thin-film aluminium, the physicists observed for the first time a topological phase transition which implies the appearance of Majorana fermions in phase-controlled Josephson junctions. The setup realized experimentally here constitutes a versatile platform for the creation, manipulation and control of Majorana fermions, which offers several advantages compared to previous one-dimensional platforms. According to Hankiewicz, „this is an important step towards an improved control of Majorana fermions.“

The proof of concept of a topological superconductor based on a two-dimensional Josephson junction opens up new possibilities for the research on Majorana fermions in condensed matter physics. In particular, several constraints of previous realizations of Majorana fermions can be avoided.

At the same time, an improved control of Majorana fermions represents an important step towards topological quantum computers. Theoretically, such computers can be significantly more powerful than conventional computers. They thus have the potential to revolutionize computer technology.

Next, the researchers plan to improve the Josephson junctions and move towards junctions with narrower normal regions. Here, more localized Majorana fermions are expected. They further study additional possibilities of manipulating Majorana fermions, for example, by using other semiconductors.