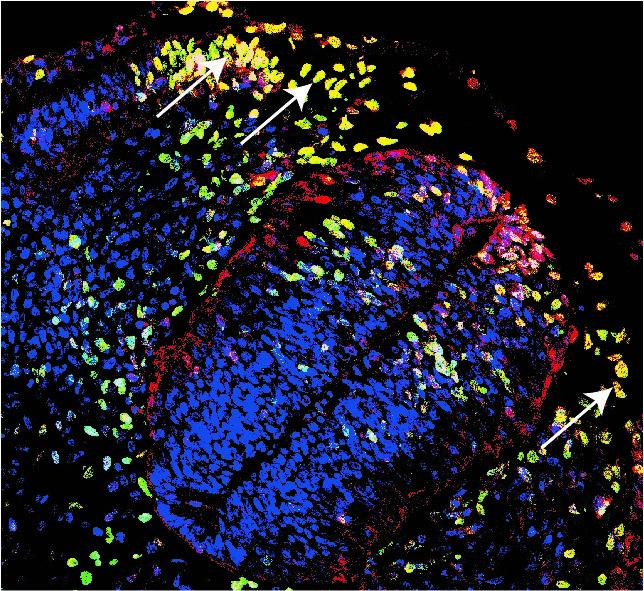 The yellow cells, indicated by arrows, are the first evidence of increased ribosome biogenesis in cells during epithelial-to-mesenchymal transition (EMT). Credit: Vincent et al. Usage Restrictions: May only be published in connection to reports about the research by Vincent et al. or after permission from the research group.

As tumours progress towards advanced stages they dedifferentiate, become more aggressive and lose the characteristics of the origin tissue. They also acquire the migratory capacity that allows the tumour to spread or metastasize to distant sites in the body, eventually causing patient death.

For epithelial tumours to metastasis the tumour cells undergo a process known as the epithelial-to-mesenchymal transition (EMT), which allows the cells to develop migratory ability.

During EMT, cells also lose their proliferative capacity and become more stem-like. This remarkable transition leads to both increased invasiveness and an ability to evade numerous cancer treatments including hormonal therapies.

In the present study the researchers found that EMT is aided by the synthesis of new ribosomes, which serve to synthesize the proteins required for cell functions. Their study therefore argues that ribosome biogenesis may be more than just a pro-proliferative process.

“Until recently, ribosomes have been considered to play only passive roles during the production of proteins. Our study shows that ribosomes potentially have complex, active roles and suggests that more attention should be given to understanding how ribosomes contribute to cell physiology in health and disease states,” says Theresa Vincent, group leader at the Department of Immunology, Genetics and Pathology at Uppsala University, who has led the study together with Scott C. Blanchard at Weill Cornell Medicine, USA.

The researchers also demonstrated that by inhibiting the formation of new ribosomes, aggressive and hormone insensitive tumours could be partially reverted to a benign and non-metastatic type.

“We used a small molecule called CX-5461 to inhibit ribosome biogenesis in mouse models of human tumours. We found that primary tumours reverted from an invasive type to a non-invasive type as well as potentially regaining sensitivity to hormonal therapy. Importantly, CX-5461 treatment also resulted in a marked reduction of number lung metastases.

This suggests that treatment with CX-5461 may enhance hormone therapy responsiveness in patients where this kind of treatment doesn't work any more. We find this to be a remarkable breakthrough and we are currently pursuing a number of additional validation studies,” says Theresa Vincent.

The study was by performed by a multi-institutional group of scientists from Uppsala University, Karolinska Institutet and Lund University in Sweden, together with researchers in USA, Austria, Spain and United Arab Emirates.