Black holes turn up the heat for the Universe 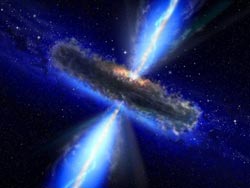 A supermassive black hole is surrounded by a dust ring (torus). The collapse of gas onto the black hole launches an energetic jet of matter and radiation, which is transported over cosmological distances. A jet that is pointing into our direction is called a &quot;blazar&quot;. copyright: ESA/NASA, the AVO project and Paolo Padovani<br>

So far, astrophysicists thought that super-massive black holes can only influence their immediate surroundings. A collaboration of scientists at the Heidelberg Institute for Theoretical Studies (HITS) and in Canada and the US now discovered that diffuse gas in the universe can absorb luminous gamma-ray emission from black holes, heating it up strongly.

This surprising result has important implications for the formation of structures in the universe. The results have just been published in “The Astrophysical Journal“ and „Monthly Notices of the Royal Astronomical Society”.

Every galaxy hosts a supermassive black hole at its center. Such black holes can emit high-energy gamma rays and are then called blazars. Whereas other radiation such as visible light and radio waves traverses the universe without problems, this is not the case for high-energy gamma rays. This particular radiation interacts with the optical light that is emitted by galaxies, transforming it into the elementary particles electrons and positrons.

Initially, these elementary particles move almost at the speed of light. But as they are slowed down by the ambient diffuse gas, their energy is converted into heat, just like in other braking processes. As a result, the surrounding gas is heated efficiently. In fact, the temperature of the gas at mean density becomes ten times higher, and in underdense regions more than one hundred times higher than previously thought.

A Journey into the Cosmic Youth

“Blazars rewrite the thermal history of the universe”, emphasizes Dr. Christoph Pfrommer (HITS), one of the authors. But how can this idea be tested? In the optical spectra of quasars there is a plethora of lines, called the “line forest”. The forest originates from the absorption of ultra-violet light by neutral hydrogen in the young Universe. If the gas becomes hotter, weak lines in the forest are broadened. This effect represents an excellent opportunity to measure temperatures in the early Universe, while it was still growing up.

The astrophysicists at HITS checked this newly postulated heating process for the first time with detailed supercomputer simulations of the cosmological growth of structures. Surprisingly, the lines were broadened just enough so that their properties perfectly matched those of the observed lines. “This allows us to elegantly solve a long-standing problem with the quasar data”, says Dr. Ewald Puchwein, who conducted the large simulations on the supercomputer at HITS.

How Black Holes Influence the Formation of Galaxies

What are the further consequences of this new heating process? The forest of lines in the quasar spectra originates from density fluctuations in the Universe. In the course of cosmic evolution, the densest fluctuations collapse to form galaxies and galaxy clusters, as observed in the local Universe. Diffuse gas that is too hot cannot collapse. Hence, the formation of dwarf galaxies is slowed or even entirely suppressed. This could be the key to the solution of another long-standing problem in the theory of galaxy formation: why do we observe fewer dwarf galaxies in the vicinity of the Milky Way and in the underdense regions than predicted by cosmological simulations?

Prof. Volker Springel, scientific group leader at HITS, explains: “The process of blazar heating is especially exciting since this single effect is able to simultaneously solve several different puzzles in cosmological structure formation.” The group plans to further improve their simulation models for a still deeper understanding of the nature of blazar heating and its implications for today's Universe.