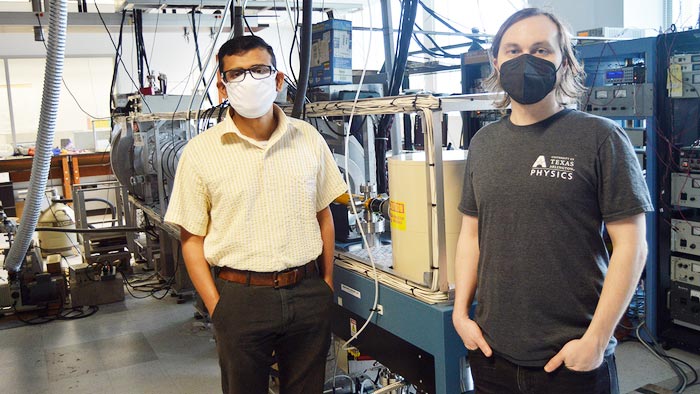 Physicists at The University of Texas at Arlington have developed a new technique that can measure the properties of the topmost atomic layer of materials without including information from the underlying layers.

Researchers from the Positron Lab in the UTA Department of Physics utilized a process called auger-mediated positron sticking (AMPS) to develop a novel spectroscopic tool to measure the electronic structure of the surface of materials selectively.

A new article, “Photoemission spectroscopy using virtual photons emitted by positron sticking: A complementary probe for top-layer surface electronic structures,” published in the journal Physical Review Letters (PRL), details the new technique. In addition, the online magazine Physics published a Viewpoint article on the publication, titled “Spectroscopy That Doesn’t Scratch the Surface,” which explains why the paper is important to the field. Viewpoint articles are commissioned by PRL editors for papers they believe will draw broad interest.

The AMPS process, in which positrons (antimatter of electrons) stick directly to surfaces followed by electron emission, was first observed and described by Saurabh Mukherjee, a graduate student, along with Weiss and other colleagues, in 2010 at UTA. Those results were published in a paper in PRL.

“Alex (Fairchild) and Varghese figured out how to use this phenomenon that we discovered in 2010 to measure the top layer and get information about the electronic structure and the behavior of the electrons in the top layer,” Weiss said. “That will determine a material’s many properties, including conductivity, and can have important implications for building devices.”

Fairchild said the AMPS process is unique because it uses virtual photons to measure the topmost atomic layer.

“This is different from typical techniques like photoemission spectroscopy, where a photon penetrates multiple layers into the bulk of a material and therefore contains the combined information of the surface and subsurface layers,” Fairchild said.

“Our AMPS results showed how virtual photons emitted following positron-sticking interact preferably with electrons that extend further into the vacuum than with electrons that were more localized to the atomic site,” Chirayath said. “Our results are thus essential to understand how positrons interact with surface electrons and are extremely important to understand other similarly surface-selective, positron-based techniques.”

Weiss noted that the UTA Positron Lab is currently the only place this technique could have been developed, due to the capabilities of its positron beam.

“At present, UTA probably has the only lab in the world that has a positron beam that can get down to the low energies needed to observe this phenomenon,” Weiss said.

The study was supported by funding from the Welch Foundation and the National Science Foundation.