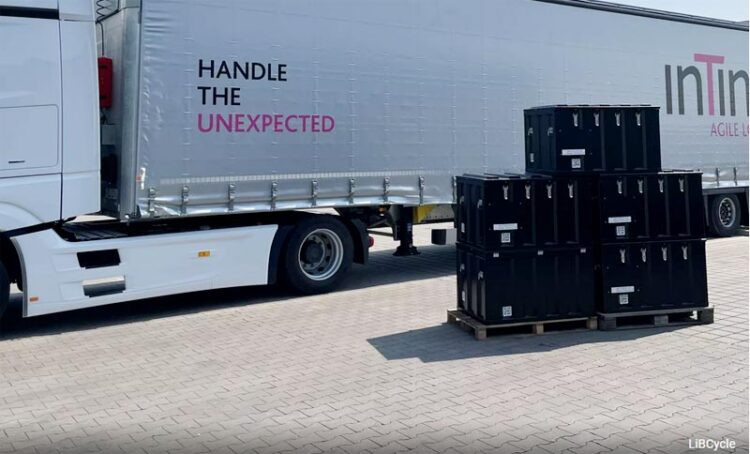 The combination of self-developed transport boxes and the appropriate logistics are trademarks of the start-up company.
(c) LiBCycle

What began as an idea about a transport container for old batteries has in the meantime grown into a complete recycling service for used batteries. The start-up LiBCycle, founded at the Technical University of Munich (TUM), is committed to Circular Economy and is thus contributing to sustainable mobility.

“We don’t want to spend all our time running from one financing round to the next, we want to do something to make our company sustainable!” And company founder Philipp Brunotte’s position regarding the financial situation of his start-up goes for the entire company. Together with partner Áron Németh, in 2021 he founded LiBCycle, a Circular Economy service provider for used and defective lithium-ion batteries. Its largest customer? The automotive sector, whose transformation to electro-mobility is driving enormous demand for ways to dispose of old batteries, a service the branch is happy to delegate to service providers. The core element of the start-up is a specially developed transport container that significantly simplifies handling battery packages. “Our containers make life very easy for the car manufacturers. We pick up the batteries and bring them directly to the recycler or to a second-life provider. All the manufacturers need to do is place an order, LiBCycle takes care of the rest,” says Áron Németh, CTO of the start-up and currently enrolled in the TUM “Development, Production and Management in Mechanical Engineering” Master’s program.

The two entrepreneurs had the idea for LiBCycle while students at TUM. The first business plan emerged during the TUM Entrepreneurial Masterclass, where students can write their Master’s theses and prepare to found their start-ups. After completing the class, Philipp Brunotte went on to found LiBCycle with Áron Németh. “In the beginning we were focused on our transport containers, but based on our customers’ wishes it was soon obvious that we’d have to take a holistic approach. So we took on the logistics and the recycling together with partner companies,” recalls Philipp Brunotte, who completed his Master’s degree in Mechanical Engineering and Management at TUM, describing the evolution of today’s company. Nevertheless the spotlight is still on the transport container developed by the two founders. They made the first prototypes in TUM’s MakerSpace, a high-tech workshop where founders can take their ideas from the drawing board to reality. Breaking away from the conventional industry approach, the LiBCycle box doesn’t use loose materials as filler to separate the individual battery modules; instead it uses flexible fiberglass cushions. This is a more sustainable solution which also simplifies handling and cuts the time needed for the driver to load the containers. The patent application for the container and its components has already been submitted.

Cashflow-positive after just one year

Thanks to an investor from the logistics sector, the young company is now also capable not only of handling packaging, but the complete transport of old, defective and destroyed batteries, exactly what the market is currently calling for. Automobile manufacturers are eager to outsource the entire end-of-service-life process for vehicle batteries. The company is thus doing its part for sustainable electric mobility, since the growing number of electric cars is consuming a considerable amount of finite resources such as rare earth metals. Circular Economy makes it possible to use these resources longer or to recycle them for use in new batteries. And after only one year LiBCycle is already “Cashflow-positive”, i.e. the founders are taking in more money than they have to spend. Although the company has up to now primarily limited its operations to Germany and neighboring countries, in the future the company plans to move into the international market.

In addition to using MakerSpace and the TUM Incubator, the start-up received support in several programs at UnternehmerTUM, the TUM Center for Innovation and Business Creation. The programs included Industrial Innovators and Xplore.