Home / Physics and Astronomy / A galactic test will clarify the existence of dark matter
26.06.2018

A galactic test will clarify the existence of dark matter 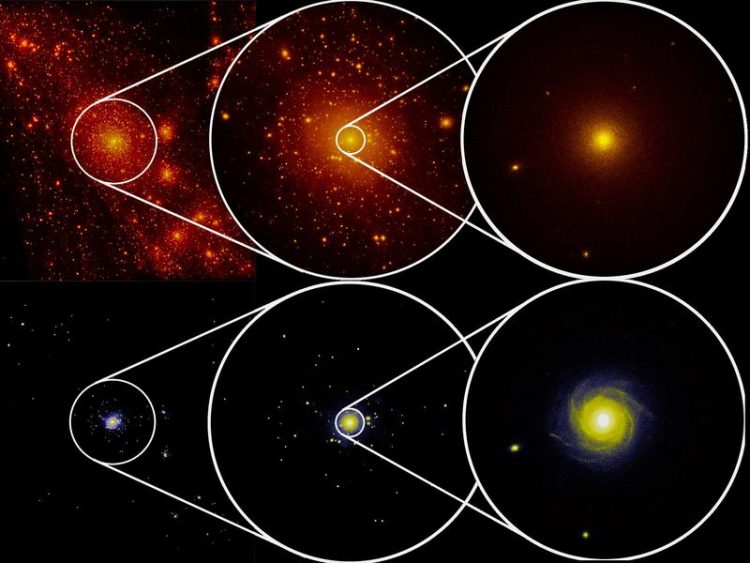 Simulation: This picture shows the distribution of dark matter (above) and stars (below). © E. Garaldi, C. Porciani, E. Romano-Díaz /University of Bonn for the ZOMG Collaboration

Using one of the fastest supercomputers in the world, the scientists have simulated the matter distribution of the so-called satellite “dwarf” galaxies. These are small galaxies that surround, for instance, the Milky Way or Andromeda.

The researchers focused on a relationship called “radial acceleration relation” (RAR). In disk galaxies, stars move in circular orbits around the galactic center. The acceleration that forces them to constantly change direction is caused by the attraction of matter in the galaxy. The RAR describes the relationship between this acceleration and the one caused by the visible matter only. It provides an insight into the structure of galaxies and their matter distribution.

“We have now simulated, for the first time, the RAR of dwarf galaxies on the assumption that dark matter exists,” explains Prof. Dr. Cristiano Porciani of the Argelander Institute for Astronomy at the University of Bonn. “It turned out that they behave as scaled-down versions of larger galaxies.”

But what if there is no dark matter and instead gravity “works” differently than Newton thought? “In this case the RAR of dwarf galaxies depends strongly on the distance to their parent galaxy, while this does not happen if dark matter exists”, explains the researcher Emilio Romano-Díaz.

This difference makes the satellites a powerful probe for testing whether dark matter really exists. The Gaia spacecraft, which was launched by the European Space Agency (ESA) in 2013, could already provide an answer. It was designed to study the stars in the Milky Way and its satellite galaxies in unprecedented detail and has collected a large amount of data.

However, it will probably take years to solve this riddle. “Individual measurements are not enough to test the small differences we have found in our simulations”, explains doctoral student Enrico Garaldi. “But repeatedly taking a close look at the same stars improves the measurements every time. Sooner or later it should be possible to determine whether the dwarf galaxies behave like in a universe with dark matter – or not.”

The cement that holds galaxies together

This question is one of the most pressing issues in cosmology today. The existence of dark matter was already suggested more than 80 years ago by the Swiss astronomer Fritz Zwicky. He realized that galaxies move so fast within galaxy clusters that they should actually drift apart. He therefore postulated the presence of invisible matter which, due to its mass, exerts sufficient gravity to keep galaxies on their observed orbits. In the 1970s, his US colleague Vera Rubin discovered a similar phenomenon in spiral galaxies like the Milky Way: they rotate so quickly that the centrifugal force should tear them apart if only visible matter was present.

Today, most physicists are convinced that dark matter makes up about 80 percent of the mass in the universe. Since it does not interact with light, it is invisible to telescopes. Yet, assuming its existence provides an excellent fit to a number of other observations – such as the distribution of background radiation, an afterglow of the Big Bang. Dark matter also provides a good explanation for the arrangement and formation rate of galaxies in the universe.

However, despite numerous experimental efforts, there is no direct proof that dark matter exists. This led astronomers to the hypothesis that the gravitational force itself might behave differently than previously thought. According to the theory called MOND (MOdified Newtonian Dynamics), the attraction between two masses obeys Newton's laws only up to a certain point. At very small accelerations, such as those prevailing in galaxies, gravity becomes considerably stronger. Therefore, galaxies do not tear apart due to their rotational speed and the MOND theory can dispense with the mysterious star putty.

The new study opens up the possibility for astronomers to test these two hypotheses in an unprecedented regime.

The project was funded by the German Research Foundation (DFG) through TR333 and SFB956. The calculations were made possible by the Europe-wide PRACE network and were carried out on the Dutch supercomputer Cartesius, at SURFsara, The Netherlands.