A crystal ball into our solar system’s future 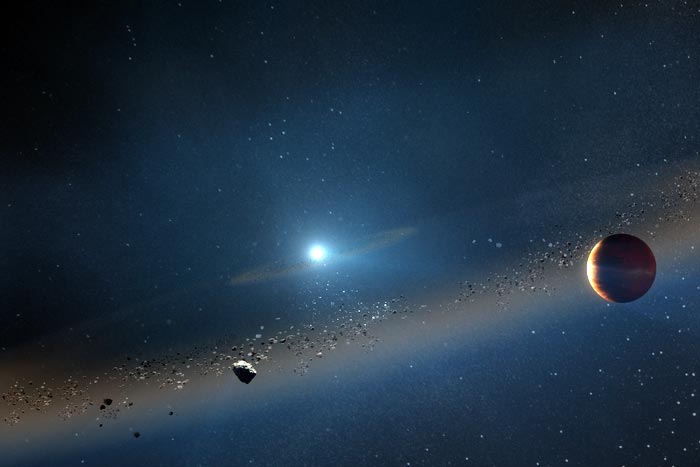 Artist’s rendition of a newly discovered Jupiter-like exoplanet orbiting a white dwarf, or dead star. This system is evidence that planets can survive their host star’s explosive red giant phase and is the very first confirmed planetary system that serves as an analog to the fate of the Sun and Jupiter in our own solar system.
Credit: W. M. Keck Observatory/Adam Makarenko

Astronomers have discovered the very first confirmed planetary system that resembles the expected fate of our solar system, when the Sun reaches the end of its life in about five billion years.

The researchers detected the system using W. M. Keck Observatory on Maunakea in Hawaiʻi; it consists of a Jupiter-like planet with a Jupiter-like orbit revolving around a white dwarf star located near the center of our Milky Way galaxy.

“This evidence confirms that planets orbiting at a large enough distance can continue to exist after their star’s death,” says Joshua Blackman, an astronomy postdoctoral researcher at the University of Tasmania in Australia and lead author of the study. “Given that this system is an analog to our own solar system, it suggests that Jupiter and Saturn might survive the Sun’s red giant phase, when it runs out of nuclear fuel and self-destructs.”

The study is published in today’s issue of the journal Nature.

“Earth’s future may not be so rosy because it is much closer to the Sun,” says co-author David Bennett, a senior research scientist at the University of Maryland and NASA’s Goddard Space Flight Center. “If humankind wanted to move to a moon of Jupiter or Saturn before the Sun fried the Earth during its red supergiant phase, we’d still remain in orbit around the Sun, although we would not be able to rely on heat from the Sun as a white dwarf for very long.”

A white dwarf is what main sequence stars like our Sun become when they die. In the last stages of the stellar life cycle, a star burns off all of the hydrogen in its core and balloons into a red giant star. It then collapses into itself, shrinking into a white dwarf, where all that’s left is a hot, dense core, typically Earth-sized and half as massive as the Sun. Because these compact stellar corpses are small and no longer have the nuclear fuel to radiate brightly, white dwarfs are very faint and difficult to detect.

The team discovered the planet using a technique called gravitational microlensing, which occurs when a star close to Earth momentarily aligns with a more distant star. This creates a phenomenon where gravity from the foreground star acts like a lens and magnifies the light from the background star. If there is a planet orbiting the closer star, it temporarily warps the magnified light as the planet whizzes by.

Strangely, when the team tried to look for the planet’s host star, they unexpectedly discovered the starlight wasn’t bright enough to be an ordinary, main sequence star. The data also ruled out the possibility of a brown dwarf star as the host.

“We have also been able to rule out the possibility of a neutron star or a black hole host. This means that the planet is orbiting a dead star, a white dwarf,” says co author Jean-Philippe Beaulieu, Professor, Warren chair of Astrophysics at the University of Tasmania and Directeur de Recherche CNRS at the Institut d’Astrophysique de Paris. “It offers a glimpse into what our solar system will look like after the disappearance of the Earth, whipped out in the cataclysmic demise of our Sun.”

The research team plans to include their findings in a statistical study to find out how many other white dwarfs have intact, planetary survivors.

NASA’s upcoming mission, the Nancy Grace Roman Telescope (formerly known as WFIRST), which aims to directly image giant planets, will help further their investigation. Roman will be capable of doing a much more complete survey of planets orbiting white dwarfs located all the way into the Galactic bulge at the center of the Milky Way. This will allow astronomers to determine whether it is common for Jupiter-like planets to escape their star’s final days, or if a significant fraction of them are destroyed by the time their host stars become red giants.

“This is an extremely exciting result,” says John O’Meara, chief scientist at Keck Observatory. “It’s wonderful to see today an example of the kind of science Keck will be doing en masse when Roman begins its mission.”

W. M. Keck Observatory is a distinguished leader in the field of adaptive optics (AO), a breakthrough technology that removes the distortions caused by the turbulence in the Earth’s atmosphere. Keck Observatory pioneered the astronomical use of both natural guide star (NGS) and laser guide star adaptive optics (LGS AO) and current systems now deliver images three to four times sharper than the Hubble Space Telescope at near-infrared wavelengths. AO has imaged the four massive planets orbiting the star HR8799, measured the mass of the giant black hole at the center of our Milky Way Galaxy, discovered new supernovae in distant galaxies, and identified the specific stars that were their progenitors. Support for this technology was generously provided by the Bob and Renee Parsons Foundation, Change Happens Foundation, Gordon and Betty Moore Foundation, Mt. Cuba Astronomical Foundation, NASA, NSF, and W. M. Keck Foundation.

The Near-Infrared Camera, second generation (NIRC2) works in combination with the Keck II adaptive optics system to obtain very sharp images at near-infrared wavelengths, achieving spatial resolutions comparable to or better than those achieved by the Hubble Space Telescope at optical wavelengths. NIRC2 is probably best known for helping to provide definitive proof of a central massive black hole at the center of our galaxy. Astronomers also use NIRC2 to map surface features of solar system bodies, detect planets orbiting other stars, and study detailed morphology of distant galaxies.

The W. M. Keck Observatory telescopes are among the most scientifically productive on Earth. The two 10-meter optical/infrared telescopes atop Maunakea on the Island of Hawaiʻi feature a suite of advanced instruments including imagers, multi-object spectrographs, high-resolution spectrographs, integral-field spectrometers, and world-leading laser guide star adaptive optics systems. Some of the data presented herein were obtained at Keck Observatory, which is a private 501(c) 3 non-profit organization operated as a scientific partnership among the California Institute of Technology, the University of California, and the National Aeronautics and Space Administration. The Observatory was made possible by the generous financial support of the W. M. Keck Foundation. The authors wish to recognize and acknowledge the very significant cultural role and reverence that the summit of Maunakea has always had within the Native Hawaiian community. We are most fortunate to have the opportunity to conduct observations from this mountain.