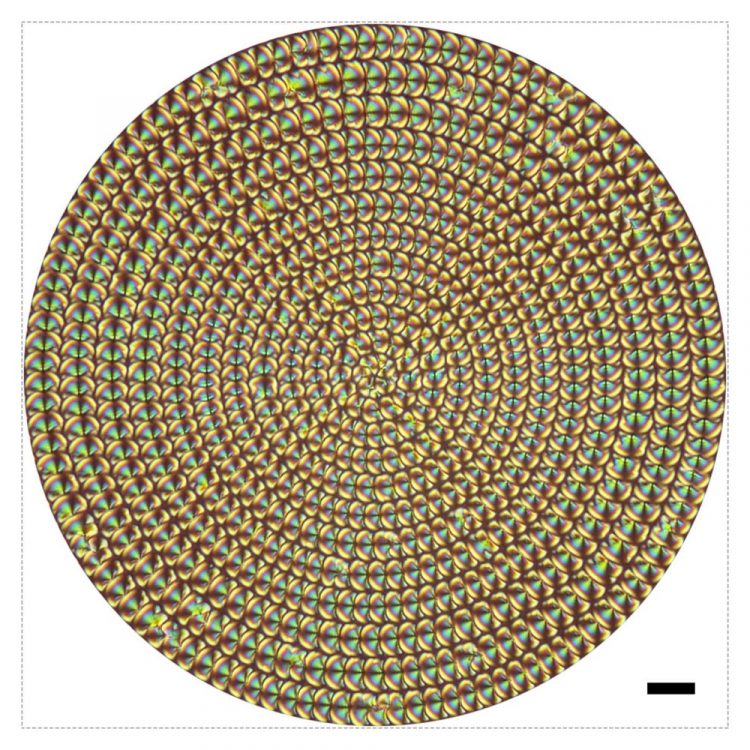 Polarized light contains waves that undulate in a single plane, whereas unpolarized light, such as that from the sun, contains waves that move in every direction. Light can become polarized by reflecting off objects, and detecting this type of light could reveal hidden information. For example, cancer cells can reflect polarized light differently than healthy tissues. Wei Hu, Yan-Qing Lu and colleagues wanted to develop a portable, inexpensive and easy-to-use microlens to simultaneously acquire 3D space and polarization information, thereby producing 4D images.

To make their microlenses, the researchers used liquid crystals, materials found in most electronic displays. With a self-assembly process, they patterned arrays of liquid crystal microlenses into concentric circles. The researchers used a polarized optical microscope to image objects, such as a cross or the letter “E,” under different directions of linearly polarized light. Microlenses in the array imaged the object differently, depending on their distance from the object (depth) and the direction of polarized light, producing 4D information. Although the resolution needs to be improved, the technique could someday be used in applications such as medical imaging, communications, displays, information encryption and remote sensing, the researchers say.

The American Chemical Society, the world's largest scientific society, is a nonprofit organization chartered by the U.S. Congress. ACS is a global leader in providing access to chemistry-related information and research through its multiple databases, peer-reviewed journals and scientific conferences. ACS does not conduct research, but publishes and publicizes peer-reviewed scientific studies. Its main offices are in Washington, D.C., and Columbus, Ohio.