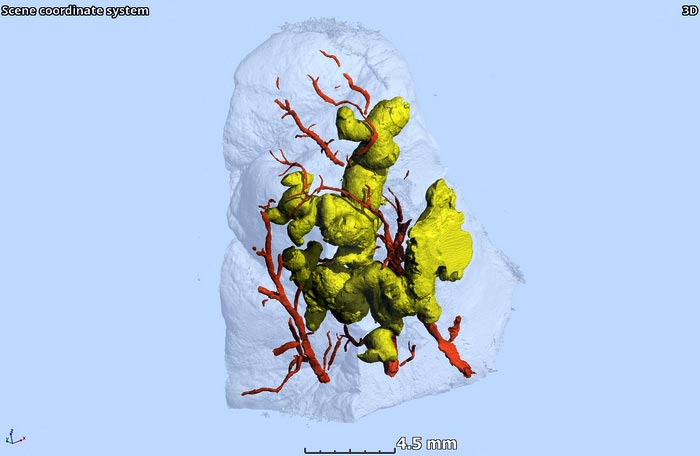 Insights that are not possible with conventional two-dimensional platforms include characterization of obliterated airways in tuberculosis and hemorrhage from ruptured blood vessels in COVID-19 lungs, at near-microscopic levels.

Gross anatomy reveals three-dimensional shapes of pathology at a large scale. Histology, in contrast, reveals the microscopic anatomy of biological structures. But that magnification comes at a cost — histology shows only two-dimensional shapes because it studies small, flat slices of stained tissue.

This lack of three dimensions means histology can miss important pathophysiologies in the damaged lungs of patients with tuberculosis, or TB, and COVID-19, the two deadliest infectious diseases of mankind in recent years.

Now researchers report that a powerful imaging tool called microCT can be used to create a three-dimensional, or 3D, atlas of the spectrum of lung lesions in both tuberculosis and COVID-19, at near-microscopic levels. This gives unexpected insights into the unseen microarchitecture of the lesions within the context of the whole lung.

The research, published in the journal EMBO Molecular Medicine — with one of the 3D images featured on the journal cover, was led by Adrie Steyn, Ph.D., a professor in the Department of Microbiology at the University of Alabama at Birmingham and member of the Africa Health Research Institute, or AHRI, University of KwaZulu-Natal, in Durban, South Africa, along with UAB and AHRI researchers and colleagues at various South African institutions.

“To the best of our knowledge, this is the first study to use microCT to elucidate macro- and microscopic features of tuberculosis lesions such as cavitation, calcification and necrosis, as well as COVID-19 pathophysiology across large lung samples in three dimensions,” Steyn said. “A major new contribution of this study is the characterization of obliterated airways in TB and hemorrhage from ruptured blood vessels in COVID-19 lungs that would not be possible with conventional two-dimensional platforms. Further, microCT analysis of an entire COVID-19 lung lobe in 3D represents a technical advance that enabled us to contextualize vascular pathology within the greater lung architecture and visualize vascular micro-architecture in remarkable detail.”

One of the benefits of microCT is creating a 3D image of a lesion. In a tuberculosis paper last year, Steyn and colleagues showed that power. For 70 years, they said, clinicians thought TB granulomas in the lungs of patients were spherical or ovoid because conventional histology showed round features, and researchers intuitively assumed those meant the granulomas were spherical or ovoid. But such round images are similar to cutting a very thin slice through a thick tree branch and assuming the branch is round or oval.

Instead of spheres, the 3D images revealed the larger granulomas as anything but round — they had complex, branched shapes. One looked somewhat like a ginger root, and another like a cluster of early buds on a cherry tree, before the blossoms appear.

In Steyn’s current study, researchers also identified an unusual spatial arrangement of vasculature within an entire lobe of a COVID-19 lung, and 3D images of blood vessels revealed microangiopathy associated with hemorrhage.

Notably, Steyn says, this imaging of pathological anomalies revealed hidden pathological structures that might have been disregarded, demonstrating a powerful method to visualize pathologies in 3D in TB lung tissue and whole COVID-19 lobes.

The researchers compared microCT with two lower-resolution clinical imaging platforms that do not yield accurate three-dimensional images of TB lesions — high-resolution computed X-ray tomography, which is used to aid diagnosis of tuberculosis, and low resolution, low-energy “soft” X-ray CT, commonly used in mammography. MicroCT imaging provides higher resolution compared to the other two; but its samples must be close to the X-ray source, so microCT analysis is limited to post-mortem or resected lung tissue.

Worldwide, a vast number of formalin-fixed, paraffin-embedded tuberculosis lung specimens from decades of research are available. The Steyn research team showed that microCT is able to directly characterize calcium deposits, as well as necrotic and partially calcified necrotic granulomas in those specimens. Further, they found that removing the paraffin allowed visualization of more detailed microanatomical features.

“We anticipate that microCT could be used to establish a three-dimensional reference atlas of the human tuberculous lung derived from digitized 3D image libraries of tissue, organs from new patients and existing fixed-tissue libraries,” Steyn said. “This atlas could be used to identify novel imaging biomarkers. Also, we expect an atlas of tuberculosis and COVID-19 lesion types will inform our understanding of the failure of localized immunity and be an important resource for therapeutic and diagnostic development.”

Microbiology, Medicine and Pathology are departments in the Heersink School of Medicine. The paper by Steyn and colleagues is highlighted in an accompanying editorial in the journal, “Giving volume to the elephant in the imaging room,” by pulmonologist Anurag Agrawal, Ph.D.