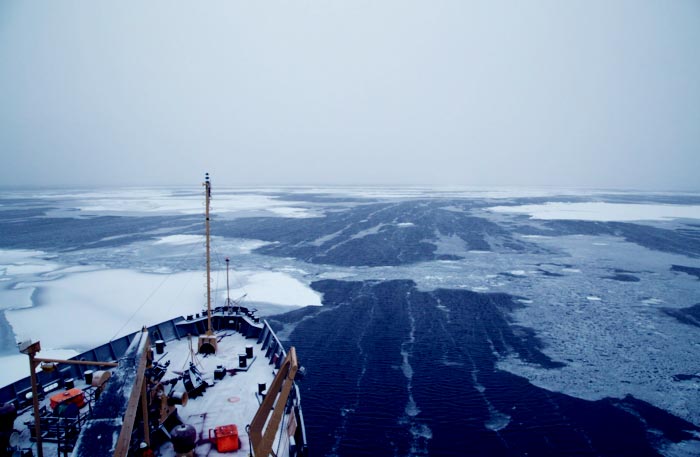 A ship-based view of the Arctic Ocean in October 2015, when the ocean’s surface is beginning to freeze. In January, when the massive 2022 cyclone occurred, large sections of the Arctic Ocean would be covered in a layer of sea ice.
Credit: Ed Blanchard-Wrigglesworth/University of Washington

A warming climate is causing a decline in sea ice in the Arctic Ocean, where loss of sea ice has important ecological, economic and climate impacts. On top of this long-term shift due to climate change are weather events that affect the sea ice from week to week.

The strongest Arctic cyclone ever observed poleward of 70 degrees north latitude struck in January 2022 northeast of Greenland. A new analysis led by the University of Washington shows that while weather forecasts accurately predicted the storm, ice models seriously underestimated its impact on the region’s sea ice.

The study, published in October in the Journal of Geophysical Research–Atmospheres, suggests that existing models underestimate the impact of big waves on ice floes in the Arctic Ocean.

“The loss of sea ice in six days was the biggest change we could find in the historical observations since 1979, and the area of ice lost was 30% greater than the previous record,” said lead author Ed Blanchard-Wrigglesworth, a research assistant professor of atmospheric sciences at the UW. “The ice models did predict some loss, but only about half of what we saw in the real world.”

Accurate sea ice forecasts are important safety tools for Northern communities, mariners and others operating in Arctic waters. The accuracy of forecasts in the Arctic Ocean also has broader effects.

The January 2022 cyclone had the lowest pressure center estimated since satellite records began in 1979 above 70 degrees north. It was an extreme version of a typical winter storm. Climate change doesn’t appear responsible for the cyclone: The researchers didn’t find a trend in the strength of intense Arctic cyclones since 1979, and sea ice area was close to the historical normal for that region before the storm hit.

During the storm, record winds howled over the Arctic Ocean. The waves grew to 8 meters (26 feet) tall in open water and remained surprisingly strong as they traveled through the sea ice. The ice heaved 2 meters (6 feet) up and down near the edge of the pack, and NASA’s ICESat-2 satellite shows that the waves reached as far as 100 kilometers (60 miles) toward the center of the ice pack.

Six days after the storm struck, the sea ice had thinned significantly in the affected waters north of Norway and Russia, in places losing more than half a meter (about 1.5 feet) of thickness.

“It was a monster storm, and the sea ice got pummeled. And the sea ice models didn’t predict that loss, which suggests there are ways we could improve the model physics,” said second author Melinda Webster, a research assistant professor at the University of Alaska Fairbanks. She begins a research position in the new year at the UW Applied Physics Laboratory.

The new analysis shows that the atmospheric heat from the storm had a small effect, meaning some other mechanism was to blame for the ice loss. Possibilities, Blanchard-Wrigglesworth suggests, include sea ice that was thinner before the storm hit than models had estimated; that the storm’s waves broke up ice floes more forcefully than models predicted as they penetrated deep into the ice pack; or that waves churned up deeper, warmer water and brought it into contact with the sea ice, melting the ice from below.

The unexpected ice loss, despite an accurate storm forecast, suggests that this is an area where models could improve. The researchers hope to monitor future storms to pinpoint exactly what led to the dramatic sea ice loss, potentially by placing sensors in the path of a future approaching storm.

While this storm doesn’t appear to be linked to climate change, an increasing amount of open water as sea ice melts is allowing for larger waves that are eroding Arctic coastlines. Those waves, researchers said, could also affect the remaining sea ice pack.

“Going into the future, this is something to keep in mind, that these extreme events might produce these episodes of huge sea ice loss,” Blanchard-Wrigglesworth said.

Other co-authors are Linette Boisvert at NASA, Chelsea Parker at NASA and the University of Maryland and Christopher Horvat at the University of Auckland and Brown University. The research was funded by NASA, the U.S. Navy’s Office of Naval Research and Schmidt Futures.