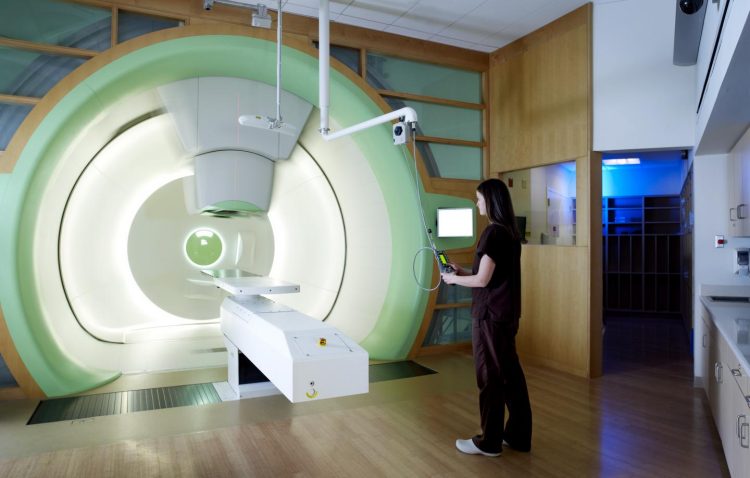 Treating prostate cancer with higher doses of proton therapy over a shorter amount of time leads to similar outcomes when compared to standard dose levels and treatments and is safe for patients, according to a new study examining the risk of long-term side-effects from the treatment.

Researchers in the Perelman School of Medicine at the University of Pennsylvania and the Roberts Proton Therapy Center examined data on non-metastatic prostate cancer patients treated with 28 doses of proton therapy instead of the standard 44 and found that the rates of cancer control at four years was the same in both groups, with notably low rates of urologic and gastrointestinal effects from the treatment at four-year follow up.

The findings, which are the first to show patient reported outcomes for shorter courses of proton therapy in prostate cancer, were published in the International Journal of Radiation Oncology, Biology, Physics.

The shorter course of radiation is called hypofractionation, and previous studies have shown it can be effective with traditional photon radiation, but proton therapy has a few key differences. Photon radiation typically uses multiple x-ray beams to attack a tumor target but unavoidably deposits radiation in the normal tissues beyond the target, potentially damaging those tissues as the beam exits the body.

Proton therapy is an FDA-approved treatment that is an alternative radiation treatment. It directs positively charged protons at the tumor target, where they deposit the bulk of the radiation dose, with minimal residual radiation delivered beyond the target, potentially reducing side effects and damage to surrounding tissue.

Due to these differences, researchers point out the need for better understanding of patient outcomes for the hypofractionated approach in protons, specifically.

“Even though protons are a more targeted way to deliver radiation, we need to make sure we understand the long-term effects of giving patients a higher dose of radiation during each treatment, and our study shows it's safe,” said the study's lead author Amardeep Grewal, MD, assistant chief resident in Radiation Oncology.

The study looked at data on 184 men who received hypofractionated proton therapy for prostate cancer that had not spread. At a follow up of 49 months, 96 percent (N = 179) were still alive, with none of the patient deaths related to treatment. The cumulative four-year rate of serious gastrointestinal problems was estimated at 13.6 percent, almost all of which occurred in the first two years.

Of the patients who had GI effects, 79 percent experienced rectal bleeding. The cumulative four-year rate of urologic issue was 7.6 percent. The most common issue was needing to urinate frequently. All issued resolved within six months.

“This study provides some prospective evidence that the higher daily radiation dose delivered in hypofractionated proton therapy does not negatively impact patient quality of life,” said senior author Neha Vapiwala, MD, an associate professor of Radiation Oncology. “These data can help guide clinicians and patients as they weigh treatment efficacy, tolerability and convenience.”

The authors say more research is needed to evaluate the differences between hypofractionated radiation with photon and proton radiation.

This study was supported by the Department of Defense and the Prostate Cancer Foundation.

Penn Medicine is one of the world's leading academic medical centers, dedicated to the related missions of medical education, biomedical research, and excellence in patient care. Penn Medicine consists of the Raymond and Ruth Perelman School of Medicine at the University of Pennsylvania (founded in 1765 as the nation's first medical school) and the University of Pennsylvania Health System, which together form a $7.8 billion enterprise.

The Perelman School of Medicine has been ranked among the top medical schools in the United States for more than 20 years, according to U.S. News & World Report's survey of research-oriented medical schools. The School is consistently among the nation's top recipients of funding from the National Institutes of Health, with $425 million awarded in the 2018 fiscal year.

Penn Medicine is powered by a talented and dedicated workforce of more than 40,000 people. The organization also has alliances with top community health systems across both Southeastern Pennsylvania and Southern New Jersey, creating more options for patients no matter where they live.

Penn Medicine is committed to improving lives and health through a variety of community-based programs and activities. In fiscal year 2018, Penn Medicine provided more than $525 million to benefit our community.