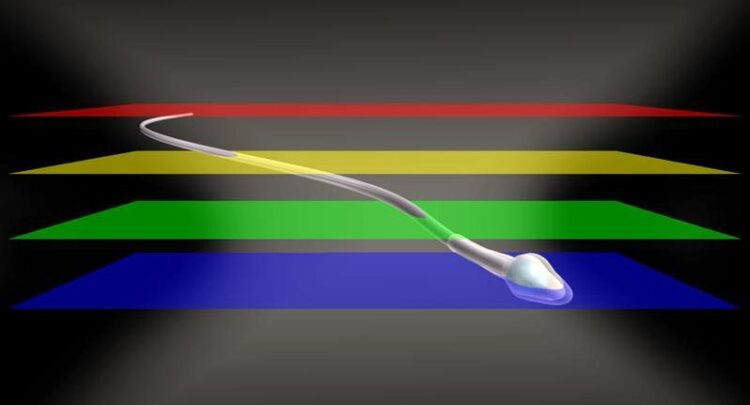 A new algorithm provides novel insight into the dynamics of flagellar beating and its connection to the swimming behavior of sperm.
© René Pascal

Researchers at the ImmunoSensation2 Cluster of Excellence at the University of Bonn, the University Hospital and the research center caesar have develop a method that allows using multi-focal images to reconstruct the movement of fast biological processes in 3D.

In the past, many discoveries have been made because better, more accurate measurement methods have become available, making it possible to obtain data from previously unexplored phenomena. For example, high-resolution microscopy has begun to dramatically change our perspectives of cell function and dynamics. Researchers at the ImmunoSensation2 Cluster of Excellence at the University of Bonn, the University Hospital and the research center caesar have now develop a method that allows using multi-focal images to reconstruct the movement of fast biological processes in 3D. The study has been recently published in the journal Nature Communications.

Many biological processes happen on a nano- to millimeter scale and within milliseconds. Established methods such as confocal microscopy are suitable for precise 3D recordings but lack the temporal or spatial resolution to resolve fast 3D processes and require labeled samples. For many investigations in biology, image acquisition at high frame rates is essential to record and understand the principles that govern cellular functions or fast animal behaviors. The challenge facing the scientists can be compared to following a thrilling tennis match: Sometimes it is not possible to follow the fast-moving ball with precision, or the ball is not discovered before it is already out of bounds.

With previous methods, the researchers were unable to track the shot because the image was blurred or the object of interest was simply no longer in the field-of-view after the picture was taken. Standard multifocal imaging methods allow high-speed 3D imaging but are limited by the compromise between high resolution and large field-of-view, and they often require bright fluorescent labels.

For the first time, the hereby described method allows multifocal imaging with both a large field of view and a high spatio-temporal resolution to be used. In this study, the scientists track the movement of non-labeled spherical and filamentous structures quickly and accurately.

As very strikingly described in the study, the new method now provides novel insight into the dynamics of flagellar beating and its connection to the swimming behavior of sperm. This connection has been possible because the researchers were able to precisely record the flagellar beat of free-swimming sperm in 3D over a long period of time and simultaneously follow sperm trajectories of individual sperm. In addition, the scientists determined the 3D fluid flow around the beating sperm. Such findings not only open the door to understand causes of infertility, but could also be used in so-called “bionics”, i.e., the transfer of principles found in nature to technical applications.

Researchers at the ImmunoSensation2 Cluster of Excellence can already use the new method – and not just to observe sperm. This method could also be used to determine the 3D flow maps that result from the beating of motile cilia. Motile cilia beat in a similar way to the sperm tail and transport fluid. Cilia-driven flow plays an important role in the ventricle of the brain or in the airways where it serves to transport mucus out of the lungs and into the throat- this is also how pathogens are transported out and warded off.

The multi-focal imaging concept reported in this study is cost-effective, can be easily implemented, and does not rely on object labeling. The researchers assert that their new method can find its way into other fields as well, and they see many other potential applications.

In addition to the ImmunoSensation2 Cluster of Excellence and the caesar research center, the University of Glasgow was involved in the study. The study received open access funding enabled by the DEAL project.