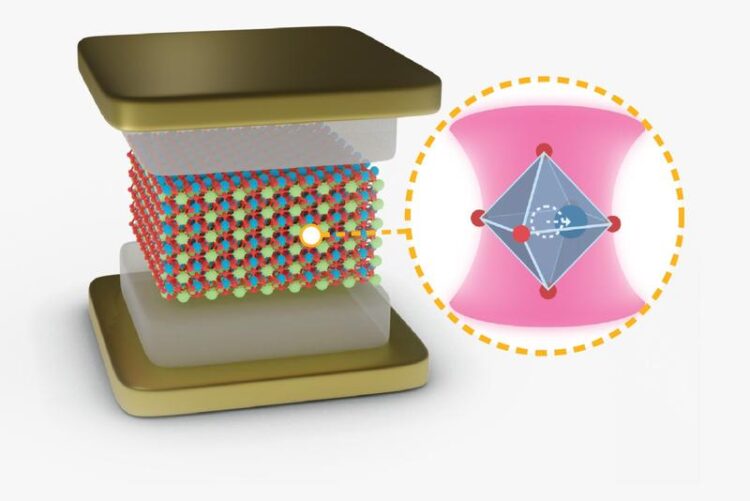 Illustration of an SrTiO₃ crystal embedded in an optical cavity. The microscopic zoom-in (right) into a crystal unit cell shows the motion of the titanium atom with respect to the oxygen atoms.
(c) S. de Latini / U. de Giovannini

Photons trapped in a cavity can cause a crystal known as strontium titanate (SrTiO₃) to become ferroelectric, according to a new study by the MPSD’s theory group. The photons that are randomly created and destructed in the vacuum of a cavity – as determined by the laws of quantum mechanics – can significantly change the way the material’s electrons and atoms behave, as in the case of SrTiO₃. These theoretical predictions, now published in PNAS, demonstrate the great potential of confined light for the toolset of materials engineering.

The team’s findings pave the way for the exploration of novel mixed light-matter phases, dubbed ‚photo-groundstates‘. These are phases where the material’s atoms and electrons have reached a new, stable state after strongly mixing with confined light.

Materials phases, such as magnetic, superconductive or ferroelectricity phases, among others, are determined by the collective behavior of the material’s atoms and electrons. When such microscopic components are forced to interact strongly with light, their collective behavior can change altogether and the material can reach a new stable phase. In this sense light can now be thought of as an extra tool to engineer materials phases and tailor their properties to specific technological applications, such as information processing, sensing or light-harvesting.

The MPSD team predicts a novel photo-groundstate for the SrTiO₃ crystal once it is placed inside an optical cavity (see illustration), where the two metal plates of the cavity squeeze the light into a narrow region of space. This boosts the interaction between the photons and the particles of the embedded material. In SrTiO₃, the positively charged titanium atoms can vibrate with respect to the negatively charged oxygen ones, which generates oscillating dipoles. In the usual groundstate, such vibrations occur only as random motions of the ions, the so-called quantum fluctuations, which normally cancel each other out and do not have any observable effect.

Thus the intricate properties of the SrTiO₃ crystal, such as its crystal structure and vibrational frequencies, are modified by adding trapped photons to the picture. This calls for an extension of the standard phase diagram to include the new light-matter coupling dimension. Now the phase of a material can not only be controlled with pressure and temperature, but also via the coupling of matter to light.

“Our discovery relies of the fundamental quantum mechanical nature of matter and light and how the two can jointly alter the properties of a material,” says lead author Simone Latini, a post-doctoral researcher and Humboldt fellow at the MPSD. “This study has already motivated a number of experimental collaborators all over the world to prove the existence of the proposed groundstate.”

The team is now on the hunt for the next photo-groundstate to open up further innovative avenues for cavity material engineering.