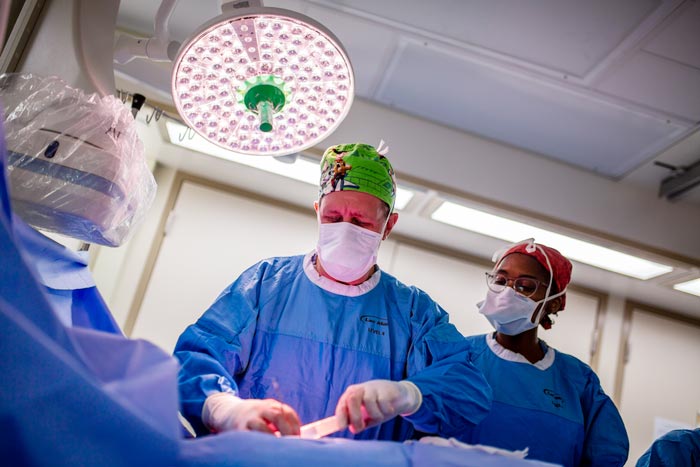 Fewer complications with device implanted under the skin.

High-risk patients who need defibrillators to prevent cardiac arrest can experience fewer complications with a type of device implanted under the skin, a Canadian study has found.

A study, conducted by researchers at Population Health Research Institute (PHRI) has demonstrated that a new type of cardiac defibrillator called a subcutaneous ICD (S-ICD) reduced patient complications by more than 90 percent, compared to the TV-ICD.

The S-ICD, implanted under the skin just below the patient’s armpit, does not involve any placement of leads into the heart or blood vessels. Instead, the S-ICD has a lead that runs under the skin, alongside the breastbone.

“The S-ICD is now an attractive alternative to the TV-ICD, particularly in patients at increased risk for lead-related complications,” adds Healey, a professor of cardiology at McMaster, and an electrophysiologist at HHS.

The study involved 544 eligible patients (one-quarter females) with average age of 49, at 14 clinical centres in Canada.

They were electrocardiographically screened; 251 patients were randomized to S-ICD and 252 patients to TV-ICD. They were followed up for an average of 2.5 years to this point; follow-up is ongoing for the study.

Younger patients are usually under-represented in ICD trials,” says Healey. “However, our study included ICD-eligible patients 18 to 60 years old who had a cardiogenetic syndrome or were at high risk for lead-related complications.”

He added: “Canada has a strong history of ICD clinical trials and registries of patients with inherited heart rhythm disorders.”

Funding for the study was provided by Boston Scientific.

Editors: Pictures of Dr. Jeff Healey in the electrophysiology lab at HHS; and his portrait picture, may be downloaded from: https://bit.ly/3uYZfgt