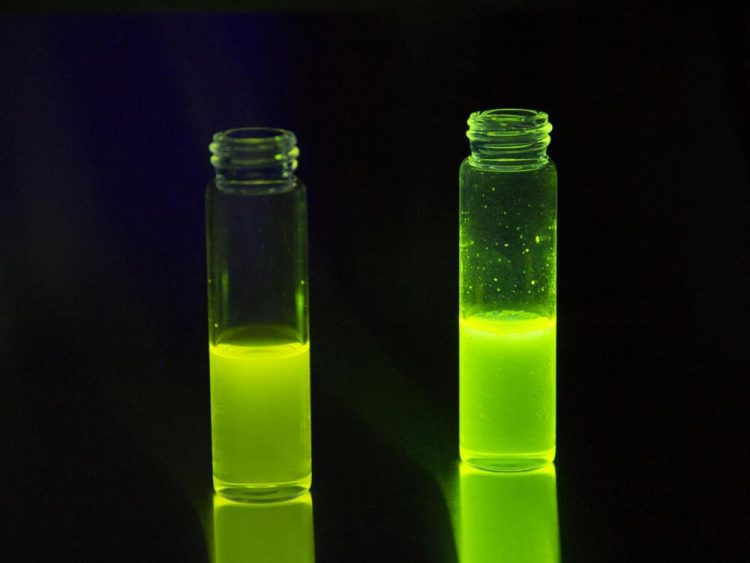 Organic polymers can nowadays be found in solar cells, sensors, LEDs and in many other technical applications. One specific type of polymers – known as S-PPVs – were previously regarded as promising in theory but were almost impossible to produce from a technical perspective.

After many years of work, a team from TU Wien has now managed to identify a new chemical synthesis process for the production of S-PPVs. This production process has now been patented.

Sulphur instead of oxygen

“PPVs are polymers that have superb technological properties”, says Florian Glöcklhofer from the Institute of Applied Synthetic Chemistry at TU Wien. “They conduct electrical current and interact with light in such a way that they are of great interest for use in solar cells or LEDs”.

They have a long, solid hydrocarbon structure to which certain side groups are attached. By choosing different side groups, it is possible to set the electronic properties of the material.

Until now, O-PPVs have been used for this; these are PPVs whose side groups are linked to the rest of the polymer via an oxygen atom. “If it is possible to replace oxygen side groups with sulphur side groups, this creates a new polymer, an S-PPV, which has significantly improved properties”, says Florian Glöcklhofer. “We knew that this could lead to improvements in the transport of electrical current and that this would significantly improve overall stability of the polymer.”

Experienced colleagues sought to dissuade Glöcklhofer from attempting to produce these S-PPVs. “It was believed to be too difficult”, explains Glöcklhofer. Nevertheless, he decided to push ahead with the project and it soon became apparent that this would be indeed a complicated challenge.

“It was important for us to develop a synthesising method that was both simple and low-cost, with as few synthesis steps as possible, and without the need for expensive special catalysts”, stresses Florian Glöcklhofer. “Ultimately, we want to produce materials that can be used in industrial applications. And S-PPV can only be commercially successful if the production costs do not exceed a certain level.”

After four years of hard work, and numerous bitter setbacks, the team finally succeeded in discovering a reliable, straightforward method for producing S-PPVs. Suitable monomers are manufactured with the help of microwave radiation. These are polymerised and the side groups can then be further modified. “It works amazingly well”, says Glöcklhofer.

“The reaction takes place within seconds. The colour changes during the process, so you can see it as it happens.”

The new synthesis method has now been patented with the help of TU Wien's Research and Transfer Support. Florian Glöcklhofer is extremely confident about the commercial success of the discovery: “It is a simple synthetic method for a new, highly promising group of polymers.

The synthesis uses inexpensive base materials and does not require any palladium catalysts or similar expensive interim steps. The method can be scaled up for industrial quantities, is easily reproducible and delivers a product that not only boasts improved electronic properties, but also improved stability”, says Glöcklhofer. Additionally, S-PPVs are also relatively non-toxic and biocompatible, making them excellent candidates for use in medical applications.

The team from TU Wien worked on the project together with a research group from Imperial College London, where Glöcklhofer recently took up a Marie Skłodowska-Curie Fellowship funded by the European Commission.