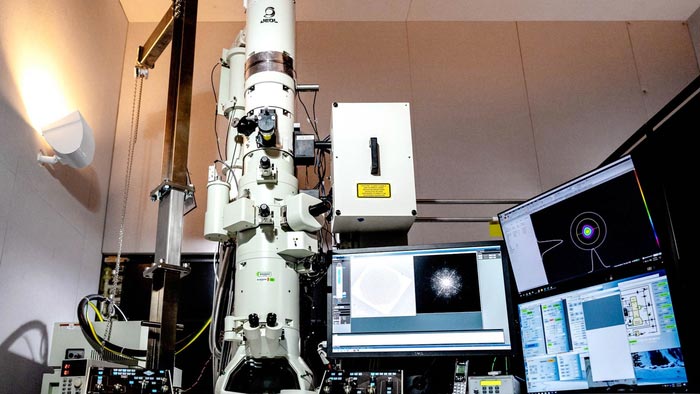 Ultrafast electron microscope opens up new avenues for the development of sensors and quantum devices.

Everyone who has ever been to the Grand Canyon can relate to having strong feelings from being close to one of nature’s edges. Similarly, scientists at the U.S. Department of Energy’s (DOE) Argonne National Laboratory have discovered that nanoparticles of gold act unusually when close to the edge of a one-atom thick sheet of carbon, called graphene. This could have big implications for the development of new sensors and quantum devices.

This discovery was made possible with a newly established ultrafast electron microscope (UEM) at Argonne’s Center for Nanoscale Materials (CNM), a DOE Office of Science User Facility.  The UEM enables the visualization and investigation of phenomena at the nanoscale and on time frames of less than a trillionth of a second. This discovery could make a splash in the growing field of plasmonics, which involves light striking a material surface and triggering waves of electrons, known as plasmonic fields.

“With ultrafast capabilities, there’s no telling what we might see as we tweak different materials and their properties.” — Haihua Liu, Argonne nanoscientist

For years, scientists have been pursuing development of plasmonic devices with a wide range of applications — from quantum information processing to optoelectronics (which combine light-based and electronic components) to sensors for biological and medical purposes. To do so, they couple two-dimensional materials with atomic-level thickness, such as graphene, with nanosized metal particles. Understanding the combined plasmonic behavior of these two different types of materials requires understanding exactly how they are coupled.

In a recent study from Argonne, researchers used ultrafast electron microscopy to look directly at the coupling between gold nanoparticles and graphene.

“Surface plasmons are light-induced electron oscillations on the surface of a nanoparticle or at an interface of a nanoparticle and another material,” said Argonne nanoscientist Haihua Liu. ​“When we shine a light on the nanoparticle, it creates a short-lived plasmonic field. The pulsed electrons in our UEM interact with this short-lived field when the two overlap, and the electrons either gain or lose energy. Then, we collect those electrons that gain energy using an energy filter to map the plasmonic field distributions around the nanoparticle.”

“It’s a remarkable new way of thinking about how we can manipulate charge in the form of a plasmonic field and other phenomena using light at the nanoscale,” Liu said. ​“With ultrafast capabilities, there’s no telling what we might see as we tweak different materials and their properties.”

This whole experimental process, from the stimulation of the nanoparticle to the detection of the plasmonic field, occurs in less than a few hundred quadrillionths of a second.

“The CNM is unique in housing a UEM that is open for user access and capable of taking measurements with nanometer spatial resolution and sub-picosecond time resolution,” said CNM Director Ilke Arslan. ​“Having the ability to take measurements like this in such a short time window opens up the examination of a vast array of new phenomena in non-equilibrium states that we haven’t had the ability to probe before. We are excited to provide this capability to the international user community.”

The understanding gained with regard to the coupling mechanism of this nanoparticle-graphene system should be key to the future development of exciting new plasmonic devices.

A paper based on the study, ​“Visualization of plasmonic couplings using ultrafast electron microscopy,” appeared in the June 21 edition of Nano Letters. In addition to Liu and Arslan, additional authors include Argonne’s Thomas Gage, Richard Schaller and Stephen Gray. Prem Singh and Amit Jaiswal of the Indian Institute of Technology also contributed, as did Jau Tang of Wuhan University and Sang Tae Park of IDES, Inc.

The research was funded by DOE’s Office of Basic Energy Sciences.

About Argonne’s Center for Nanoscale Materials
The Center for Nanoscale Materials is one of the five DOE Nanoscale Science Research Centers, premier national user facilities for interdisciplinary research at the nanoscale supported by the DOE Office of Science. Together the NSRCs comprise a suite of complementary facilities that provide researchers with state-of-the-art capabilities to fabricate, process, characterize and model nanoscale materials, and constitute the largest infrastructure investment of the National Nanotechnology Initiative. The NSRCs are located at DOE’s Argonne, Brookhaven, Lawrence Berkeley, Oak Ridge, Sandia and Los Alamos National Laboratories. For more information about the DOE NSRCs, please visit https://​sci​ence​.osti​.gov/​U​s​e​r​-​F​a​c​i​l​i​t​i​e​s​/​U​s​e​r​-​F​a​c​i​l​i​t​i​e​s​-​a​t​-​a​-​G​lance.

The U.S. Department of Energy’s Office of Science is the single largest supporter of basic research in the physical sciences in the United States and is working to address some of the most pressing challenges of our time. For more information, visit https://​ener​gy​.gov/​s​c​ience.