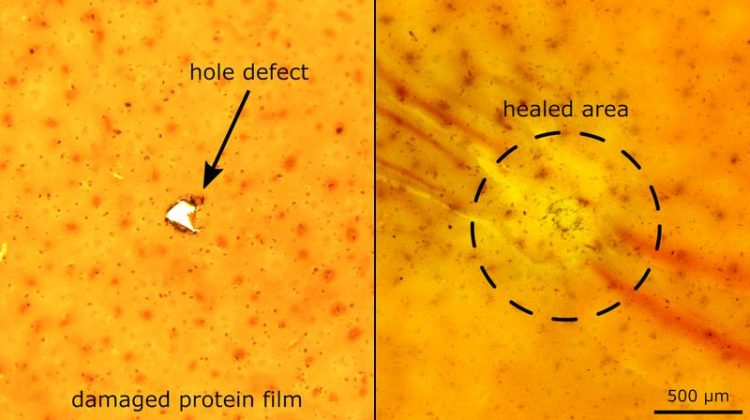 A hole seals itself MPI for Intelligent Systems

Scientists at the Max Planck Institute for Intelligent Systems (MPI-IS) in Germany and at Pennsylvania State University (PSU) in the USA have developed a soft synthetic material that can heal itself within a second after damage.

The molecules of previous deformable self-healing materials take several hours or even days to bond back together, often with low strength at the point where they are punctured or cut. However, this new stretchable material entirely recovers its structure and properties at the blink of an eye – and it can do this over and over again.

“We have developed a new material that can heal much faster without losing its strength. We tested it with all kinds of extreme mechanical damage and repaired it within seconds,” says Dr. Abdon Pena-Francesch, lead author of the paper “Biosynthetic self-healing materials for soft machines”, which is due for publication in Nature Materials on July 27th, 2020. The journal is one of the most prestigious in the research field of material science.

Self-healing soft materials are attracting growing interest in the scientific community, particularly in robotics, where such supernatural material could tip the scale in enabling a range of robots to come to application in everyday life.

If robots are to one day work with or support humans in very dynamic and unpredictable environments, robots require material softness that allows for flexibility and compliance. However, the softer the material, the more vulnerable it is to damage.

This limits a robot’s longevity and performance, thus restricting its practical application. Instantaneous self-healing capabilities could make up for this shortcoming. In the future, invincible, self-healing robots could be employed in a broad range of areas, such as disaster recovery. Or the material could be used in the realm of protective garments that would immediately repair themselves after a cut.

Dr. Pena-Francesch and his co-authors Dr. Huihun Jung and Prof. Melik C. Demirel from PSU and Prof. Metin Sitti, Director of the Physical Intelligence Department at the MPI-IS, looked to nature and the wonders of the Earth for guidance on how to build such a smart material.

“Our goal is to create self-healing programmable materials with unprecedented control over their physical properties using synthetic biology,” says Prof. Demirel. He and his team studied the molecular structure and amino acid sequences of squid proteins and developed a new biosynthetic material using protein engineering.

“We built the molecular structure in such a way that we can program the self-healing properties” he adds. “We were able to reduce a typical 24-hour healing period to one second, so our protein-based soft robots can now repair themselves immediately. In nature, self-healing takes a long time. In this sense, our technology outsmarts nature,” says Pena-Francesch, who has been developing self-healing materials for several years.

The squid takes longer to heal because the molecular structure of the proteins inside its tentacles is not perfectly intertwined. With the laboratory-developed squid-inspired material, the scientists changed the nanostructure of the molecules until they created crosslinks between all of them.

“A network in which only a few points are connected will have defects, and its properties will not be that good. We connected all of the points and improved the material beyond what is found in nature, ” Pena-Francesch adds.

Additionally, while the molecules of most polymers and other flexible material have permanent links that cannot be put back together, each physical crosslink of the new material is reversible. Thanks to fast and quick hydrogen-bonding, the connections click right back into position at the point where the material was impaired.

A supramolecular network with unprecedented self-healing properties not only opens up a vast unexplored terrain of potential applications in robotics. “Self-repairing physically intelligent soft materials are essential for building robust and fault-tolerant soft robots and actuators in the near future,” says Prof. Metin Sitti.

Sitti and his team at MPI-IS plan to use such self-repairing soft materials in their research on medical soft robots as well as on robotic grippers. As the soft material can adapt to different shapes and is very flexible, it is useful in lifting objects. If an object tears the material while being carried around, it can easily self-heal.

Dr. Abdon Pena-Francesch is a Humboldt Postdoctoral Fellow at the Max Planck Institute for Intelligent Systems (Stuttgart, Germany). In January 2021, he will be starting his own research group as Assistant Professor at the University of Michigan (Department of Materials Science and Engineering). Abdon’s research interests are in the field of biomaterials science, biomimetics, soft matter chemistry/physics, and nanotechnology. He is especially interested in exploring biological and bioinspired materials to develop advanced soft materials for robotic applications in healthcare and bioengineering. His work has received multiple awards from diverse organizations, including a Humboldt Research Fellowship (2018), Penn State Dissertation Award (2017), and the Materials Research Society Graduate Student Award (2016). He obtained his Ph.D. in Engineering Science and Mechanics from The Pennsylvania State University (2017), and studied Mechanical Engineering (BSc, 2011) as well as Chemical Engineering (MSc, 2013) in the Chemical Institute of Sarrià (Barcelona, Spain).

Dr. Huihun Jung is currently a postdoctoral fellow at Pennsylvania State University in the Department of Engineering Science and Mechanics where he earned his doctoral degree. His expertise is in insoluble repetitive protein design and their heterologous synthesis for materials applications. Huihun received his BS/MS degrees in the department of biomedical engineering from Yonsei University, South Korea.

Prof. Melik Demirel, Lloyd and Dorothy Huck Chair in Biomimetic Materials, is a scientist and innovator (National Academy of Innovators-NAI member) with expertise in biotechnology, nanotechnology and materials science. He is currently directing the Center for Advanced Fiber Technologies (CRAFT). Over the past two decades, Professor Demirel and his research team have focused on developing functional nanoscale biomimetic materials. His team designed, fabricated and synthesized advanced materials by studying the functional transitions of biomimetic systems, both computationally and experimentally. Prof. Demirel's achievements have been recognized, in part, through his receipt of a Young Investigator Award from the Department of Defense, an Alexander von Humboldt Fellowship, as a Wyss Institute Visiting Scholar at Harvard University, an Institute for Complex Adaptive Matter Junior Fellowship, The Nicholas and Gelsa Pelick Biotechnology Innovation Award and the Pearce Development Professorship, and a Penn State Engineering Alumni Society Outstanding Research Award. Prof. Demirel received his Ph.D. from Carnegie Mellon University, Pittsburgh, USA, and BS/MS degrees from Bogazici University, Istanbul, Turkey. Prof. Demirel is well known for his ground-breaking work on bioinspired programmable materials.

Sitti and his team aim to understand the principles of design, locomotion, perception, learning, and control of small-scale mobile robots made of smart and soft materials. The intelligence of such robots mainly comes from their physical design, material, adaptation, and self-organization more than to their computational intelligence.

Such physical intelligence methods are essential for small-scale milli- and micro-robots, especially due to their inherently limited on-board computation, actuation, powering, perception, and control capabilities. Sitti envisions that his novel small-scale robotic systems will be applied in healthcare, with the aim of having the greatest possible scientific and positive societal impact.