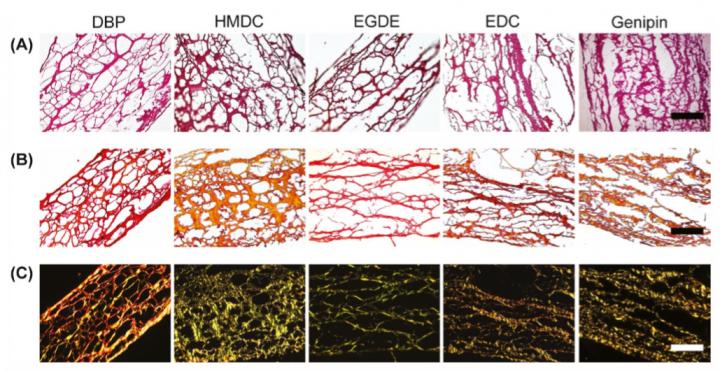 Histological study of intact and cross-linked decellularized bovine pericardium under Haematoxylin-Eosin (A) and Picrosirius Red (B and C) staining in the bright field (A and B) and in the polarized light (C). Credit: Grebenik, EA, Istranov, LP, Istranova, EV, et al. Chemical cross-linking of xenopericardial biomeshes: A bottom-up study of structural and functional correlations. Xenotransplantation. 2019;e12506. https://doi.org/10.1111/xen.12506

A group of scientists from Russia and Ireland found out how quality of tissue-engineered biomeshes (biological “frame” which is used for tissue repair) is affected by various chemical fixatives (cross-linkers).

Such compounds form chemical “bridges” between biomesh polymers and change its mechanical and functional properties. It will help to select cross-linkers for treatment of certain transplants. The research results are published in the official journal of the International Xenotransplantation Association.

The scientists have studied bovine pericardium, which is often used in reconstructive surgery. To prevent human immune system from reacting to such transplants, animal cells are removed from them leaving only extracellular matrix that forms connective tissue framework, and consists mainly of polymers – long-chain molecules (mainly proteins).

Depending on the types of tissues that transplant is used for, different properties are required. For example, an artificial heart valve needs tissue with smooth surface, high strength and resistance to enzymes. In contrast to it, bone membrane should dissolve after some time giving way to a patient's bone tissue.

To extend the stability of biomesh-based transplants and achieve the desired characteristics, cross-linkers are widely employed. The authors of the article studied the effects of naturally different cross-linkers: diisocyanate, carbodiimide, epoxy compound – and the plant metabolite genipin.

This work differs from similar studies as the biomeshes were derived from an identically treated tissue source and their mechanics was evaluated in conditions close to those of a transplant after transplantation. In the work, a wide range of cutting-edge techniques were employed to enable comprehensive characterization of the material.

Structural characteristics of the biomeshes after treatment with each of the cross-linkers were studied using a two-photon confocal laser scanning, atomic force, scanning electron and polarized light microscopies. Scientists determined their resistance to the enzymes, elasticity (Young's Modulus) and the ability to sustain cell growth.

To determine the biomesh vulnerability to the proteolytic enzymes, tissues were placed in a modelling environment containing collagenase, which destroys peptide bonds in the collagen, and monitored the biomesh dissolution.

During the histological analysis, the components of biomeshes were stained with various agents, to make it possible to determine their qualitative composition and structural organization.

Scanning electron and atomic force microscopy made it possible to obtain an accurate image of the tissue surface, and mechanical tests let assess to what extent the biomeshes can stretch (along and across the fibers) before they break. The cytotoxicity of the tissue – the possible damage that cross-linker residues could cause the cells – was also evaluated.

The results showed that three of the four tested agents significantly increased the resistance of biomeshes to the collagenase: after 24 hours the carbodiimide samples almost completely dissolved, the diisocyanate and genipin samples – partially dissolved, and epoxy compound samples – remained 94% unchanged. The genipin and epoxy compound effects led to a thickening of the tissue (from 250 to 420 and 600 micrometers, respectively), and diisocyanate and carbodiimide caused the appearance of protrusions on its surface.

Young's modulus of each matrix processed decreased as a result of tissue shrinkage. Carbodiimide and epoxy compound did not increase matrix cytotoxicity, and the cell survival remained as before the treatment – above 70%, two other agents increased cytotoxicity, but it remained at an acceptable level.

The study will help scientists to select the cross-linking agents for transplants more accurately, and to obtain a biomesh with an appropriate set of characteristics. Thus, the diisocyanate makes the graft rougher, and may be suitable for a bone implantation. And the epoxy compound helps biomesh better withstand the enzymes – which is a favorable condition for cardiovascular surgery.

The genipin gives biggest isotropy (the minimal characteristic differences along and across the fibers), and the biomeshes processed that way can be used in reconstruction of massive soft tissue defects, for example of abdominal wall.

“The study will allow to develop a new type of bioplastic materials to be used in general medical practice, primarily dentistry and cardiology,” says Peter Timashev, Director of the Institute for Regenerative Medicine, Sechenov University.

The study was conducted jointly with scientists from the Institute of Photonic Technologies of the Russian Academy of Sciences, Semenov Institute of Chemical Physics and National University of Ireland, Cork.