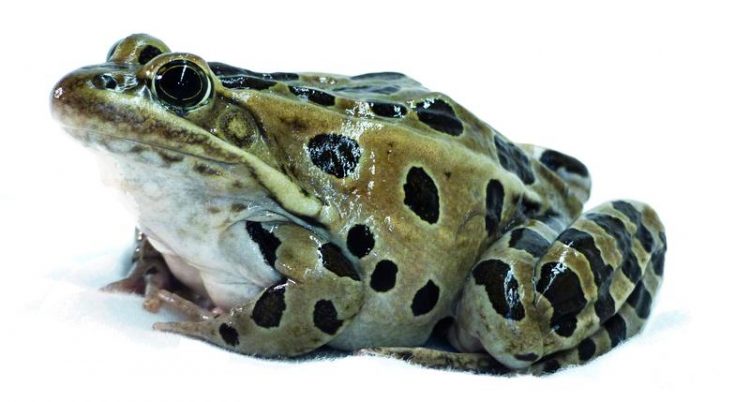 Acoustic signals play a vital role in animal life-history. Many animals use sound or vibrational cues to localize conspecifics such as mating partners or relatives, to identify predators, or to retrieve information about the emotional state of group members.

In their everyday lives, however, animals are constantly exposed to a continuous stream of environmental sounds. For efficient communication, it is therefore important to pay particular attention to biologically relevant stimuli.

Frogs have long been recognized as excellent model organisms in bioacoustics and neurobiology. To date, however, most available methods for studying auditory processing in frogs are highly invasive and thus not suitable for long-term studies in which individual animals are repeatedly exposed to different types of stimuli.

The previously applied methods also do not provide a global view of the brain, which substantially limits the questions that can be addressed.

An international research group led by Eva Ringler from Vetmeduni Vienna’s Department of Comparative Cognition in cooperation with the Messerli Research Institute, a joint institution of Vetmeduni Vienna, MedUni Vienna and the University of Vienna, and the University of California Los Angeles therefore opted for a new, non-invasive method: manganese-enhanced magnetic resonance imaging (MEMRI), an MRI technique that employs manganese as a contrast agent for neuronal activity.

The goal of the study, which was recently published in the journal Behavioral Neuroscience, was to identify the areas of the frog’s brain that are responsible for auditory processing. Ringler explains: “We were interested in determining if the neuronal processing of socially relevant acoustic stimuli engages a specific pattern of brain activation that differs from patterns elicited by less- or non-relevant acoustic signals.”

The researchers designed an experiment using three different types of acoustic stimuli (conspecific calls, noise, and silence) to investigate the effect of these signals on the brain of Northern Leopard frogs (Rana pipiens). MEMRI imaging was then used to monitor manganese uptake in different regions of the brain, with higher manganese uptake being an indication of stronger neuronal activity in the affected areas of the brain. The MRI image revealed an increased signal intensity within these areas.

“We found the greatest change in signal intensity within the torus semicircularis (the principal central auditory region in frogs) and the habenula (a part of the midbrain). In contrast to conspecific acoustic signals, stimulation with noise did not result in the same activation patterns. This indicates that signals with contrasting social relevance are differentially processed in these areas of the amphibian brain,” says Ringler.

Surprisingly, the researchers did not find any significant enhancement in signal intensity in the amygdala, although this brain region is generally known to be important for the processing of memory-based, decision-making and emotional responses in vertebrates. Also interesting is that significant difference in signal intensity were only observed when comparing conspecific calls versus silence. Stimulation with noise did not result in statistically significant signal enhancement in the whole-brain analysis.

Important new method for imaging the brains of small animals

The present study demonstrates that MEMRI is a powerful approach for studying activity patterns in the brains of small animals, such as frogs, with high resolution. The MEMRI technique allows the study of the same subject over time and addresses the entire brain at once. New insights into the brains of smaller animals are of particular interest scientifically as some regions of the brain are not present in all vertebrates.

The cerebral cortex, for example, is unique to mammals. Moreover, only little is known about functional similarities of brain regions of different animal groups. The increased use of MEMRI could help to provide new fundamental insights into the functioning of the vertebrate brain in the future. Ringler: “Given the substantial difference between the brains of different vertebrate species, comparative approaches could help us investigate the architecture and functional connectivity of vertebrate neuronal structures and thus provide us with a more complete understanding of important but poorly understood biomechanical mechanisms of perception and attention.”