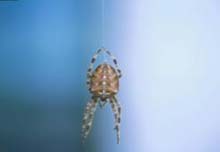 Few things appear as delicate as a spider’s web, each gossamer strand one-tenth the width of a human hair. Yet pound for pound, the sturdiest spider silks are stronger than steel and stretchier than nylon. With such remarkable properties, it’s no wonder that researchers have made numerous attempts to synthesize spider silk for industrial and medical applications. (Efforts to farm the arachnids have failed as a result of their territorial nature.) Indeed, in the words of one scientist, this goal has long stood as the “Holy Grail of material science.”

To that end, findings published today in the journal Science represent a big step toward making that dream an ironclad reality. According to the report, a team led by investigators at the Canadian company Nexia Biotechnologies has coaxed mammalian cells into producing spinnable proteins by equipping them with spider silk genes. After harvesting the proteins, the scientists spun them from a water-based solution into fine, silken threads. The synthetic strands possess the strength and toughness—although not quite the tenacity—of spider-made dragline silks, the ones the creatures use in their web frames and safety lines.