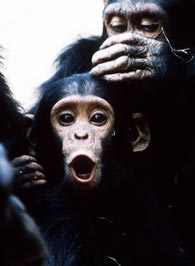 Chimpanzee waste could shed light on the origins and spread of HIV.

Delving into droppings has given AIDS researchers a surprise. Far fewer chimpanzees than they had suspected have SIVcpz, the animal virus most like HIV.

The technique could shed much-needed light on the origins and evolution of the viruses that cause AIDS. “It’s a non-invasive means to study the wild relative of HIV in its natural environment,” says Beatrice Hahn, of the University of Alabama in Birmingham, who led the new study1.

Working in Côte d’Ivoire, Uganda and Tanzania, Hahn’s team collected urine in upturned umbrellas left beneath chimp nests. They tested this for antibodies against SIVcpz (simian immunodeficiency virus). They then tested the faeces of SIVcpz -positive animals to identify which virus strain they had. Three strains of SIVcpz are closely related to HIV-1, which causes the majority of AIDS deaths in the West.

Of 58 animals tested, just one had SIVcpz. This figure has HIV experts intrigued: SIV rates can reach 90% in other primates such as African green monkeys. Many expected similar levels of infection in wild chimps.

“The prevalence is remarkably low,” says Edward Holmes of the University of Oxford, UK, who studies the origin and evolution of AIDS. The finding suggests that SIV spreads very slowly between wild chimps even in central West Africa. Yet it is here, in the forests of Cameroon and Gabon, that the SIVcpz strains most similar to HIV-1 are believed to have originated and spawned the AIDS pandemic.

That SIVcpz seems to spread poorly may have some bearing on why HIV spreads so well – even in non-human primates deliberately infected with HIV-1. “It’s interesting to know that SIVcpz is not super-infectious,” says Simon Wain-Hobson, a virologist at the Pasteur Institute in Paris, France.

Low in the mix

Until more wild animals are tested, scientists should not rush to draw too many conclusions, Hahn cautions. SIVcpz may be more common in chimps than this first faecal and urine survey suggests. Colonies rarely mix and deforestation has restricted their movement. So the virus could well be found in other groups in the future.

Holmes agrees: “There must be populations out there and we just haven’t found them.” SIVcpz is a relatively young virus, says Holmes. Having been present in chimps for perhaps less than 100 years, it is unlikely to have died out.

Continued sampling of chimpanzee waste, especially in central West Africa, may pinpoint the few populations that still harbour the ancestor of HIV-1.

The technique could also help to monitor the risk of other infectious diseases emerging from our wild relatives as we continue to encroach on their habitat. “It really does open a door to look for [other] viruses in endangered populations,” Holmes says.