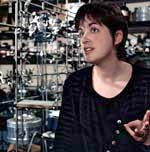 Dolphins, long considered the second-smartest species on the planet, recognize one another by name, possess a distinct concept of “self’ and, it turns out, have some surprisingly good ideas about techniques for keeping the hulls of maritime ships clean.

Karen L. Wooley, Ph.D., professor of chemistry at Washington University in St. Louis, has noted the shape and texture of dolphin skin and how it naturally prevents marine creatures from clinging to dolphin skin. The observation fits into her study of finding ways to mediate interactions between biological systems and synthetic materials, designing chemical “functionalities,” or groups of atoms, that either promote or discourage binding between them.

In one recent example, Wooley and collaborator John-Stephen A. Taylor, Ph.D., Washington University professor of chemistry, hope to employ nanoparticles that will take advantage of naturally occurring chemical interactions to deliver therapeutic drugs directly to diseased cells. At the same time, Wooley currently is developing a group of nontoxic “antifouling” coatings that may one day inhibit marine organisms such as barnacles, tube worms and zoo spores from attaching to, say, the hulls of ships.

Fouling is a huge problem for the U.S. Navy as well as the commercial shipping industry. Marine organisms secrete a type of gluey adhesive protein and, over time, cause physical damage by promoting corrosion of the metal. However, the more pressing problem is their effect on a ship’s performance — the extra growth on the hull increases friction and drag, leading to increased energy consumption. And fouling is more than just an economic issue; a less fuel-efficient ship emits greater amounts of the greenhouse gas carbon dioxide in addition to sulfur and nitrogen oxides, which promote acid rain.

Wooley presented her research to an international group of science writers, Oct. 27, 2002, at the Council for the Advancement of Science Writing’s New Horizons in Science 40th Annual Briefing. New Horizons was held Oct. 27-30 at Washington University in St. Louis, which sponsored the event. Wooley’s research is supported in part by research grants from the National Science foundation and the Office of Naval Research.

The key to Wooley’s antifouling agents is, perhaps counter-intuitively, their three-dimensional topography, which mimics such naturally occurring hydrodynamic surfaces as the skin of a dolphin. Using high-powered electron microscopy, researchers have found that dolphin skin, for all its seeming smoothness, is slightly rippled on the nanometer scale. Still, these ripples are not large enough to hinder movement through the water but are small enough that they leave few “niches” for marine creatures to grip.

“For a long time antifouling work was geared toward making super-smooth surfaces,” explained Wooley. “It was thought that if the surfaces were super-smooth and had less surface energy then the organisms couldn’t attach.

“In fact, that’s completely false,” she continued. Her current antifouling project “completely goes against the grain of what was being done. I think that I generally like to do that — just try the completely opposite approach and see what happens.”

Of course, marine fouling isn’t new, and for years the problem has been combated by applying tin or copper-based coatings, which reduce aquatic attachment but come at a price: copper and tin leach into the surrounding water, polluting the environment. In fact, the International Maritime Organization, an agency of the United Nations, has called for a worldwide ban on the use of the tin-based paint by 2003 and aims to completely remove it from all ships by 2008 — a timetable that has increased demand for a non-toxic replacement.

Wooley, an organic polymer chemist by trade, became aware of the problem, through the Office of Naval Research (ONR) which for years supported research into fluoropolymers (for instance, Teflon and other non-stick polymers) and other minimally adhesive surfaces. Wooley formulated the idea of mixing two normally incompatible polymers — a hyperbranched fluoropolymer and a linear polyethylene glycol — and allowing them to phase-separate into distinct domains, one interspersed in the other. A chemical process called crosslinking then solidifies the mixture, thus creating a heterogeneous coating that, upon close examination, reveals treacherous nano-sized terrain composed of mountains and valleys, ranging from hard to soft, hydrophilic to hydrophobic.

Getting a feel for the terrain

So how does such a coating minimize macroscopic fouling? The key is the complex surface, which makes it difficult for marine organisms to establish a toehold. Wooley’s hypothesis is that, if the coating’s surface features are in the same size-regime as the secreted protein, then the protein will be unable to bind sufficiently to maintain attachment.

“When the polymer surface is first prepared, it looks like a bunch of sub-microscopic mountains but when it’s placed under artificial sea water, the entire surface swells and gives us this inverted structure,” Wooley explained. “I think this is really exciting because what it means is that we can ’tune’ the size of the surface features and determine whether our hypothesis is really correct — do surface feature sizes influence the attachment of marine organisms?”

If she’s right, the implications could be straight out of science fiction: man-made ships protected by layers of synthetic dolphin skin. Mother Nature, it seems, may have some competition.