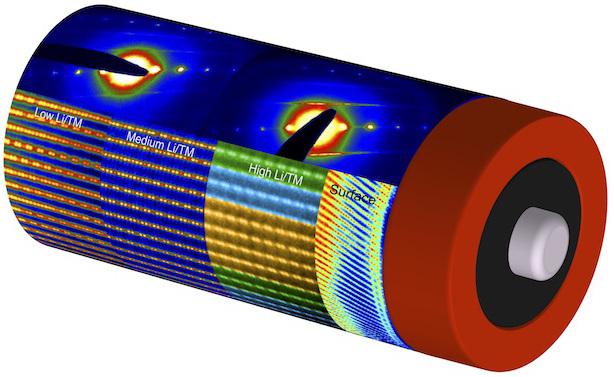 Atomic resolution scanning transmission electron microscopy images and electron diffraction patterns, arranged on a rendering of a battery, show how the structure of lithium-rich and manganese-rich transition metal oxides used inside battery cathodes changes with composition. The images also show how the surface of the cathode has a different structure than the interior. Credit: Lawrence Berkeley National Laboratory

Lithium-ion batteries are widely used in home electronics and are now being used to power electric vehicles and store energy for the power grid. But their limited number of recharge cycles and tendency to degrade in capacity over their lifetime have spurred a great deal of research into improving the technology.

An international team led by researchers from the U.S. Department of Energy's Lawrence Berkeley National Laboratory (Berkeley Lab) used advanced techniques in electron microscopy to show how the ratio of materials that make up a lithium-ion battery electrode affects its structure at the atomic level, and how the surface is very different from the rest of the material. The work was published in the journal Energy & Environmental Science.

Knowing how the internal and surface structure of a battery material changes over a wide range of chemical compositions will aid future studies on cathode transformations and could also lead to the development of new battery materials.

“This finding could change the way we look at phase transformations within the cathode and the resulting loss of capacity in this class of material,” said Alpesh Khushalchand Shukla, a scientist at Berkeley Lab's Molecular Foundry, and lead author of the study. “Our work shows that it is extremely important to completely characterize a new material in its pristine state, as well as after cycling, in order to avoid misinterpretations.”

Using a suite of electron microscopes both at the National Center for Electron Microscopy (NCEM), a Molecular Foundry facility, and at SuperSTEM, the National Research Facility for Advanced Electron Microscopy in Daresbury, U.K., the research team found that while the atoms throughout the interior of the cathode material remained in the same structural pattern across all compositions, decreasing the amount of lithium caused an increase in randomness in the position of certain atoms within the structure.

By comparing different compositions of cathode material to battery performance, the researchers also demonstrated it was possible to optimize battery performance in relation to capacity by using a lower ratio of lithium to other metals.

The most surprising finding was that the surface structure of an unused cathode is very different from the interior of the cathode. A thin layer of material on the surface possessing a different structure, called the “spinel” phase, was found in all of their experiments. Several previous studies had overlooked that this layer might be present on both new and used cathodes.

By systematically varying the ratio of lithium to a transition metal, like trying different amounts of ingredients in a new cookie recipe, the research team was able to study the relationship between the surface and interior structure and to measure the electrochemical performance of the material. The team took images of each batch of the cathode materials from multiple angles and created complete, 3-D renderings of each structure.

“Obtaining such precise, atomic-level information over length scales relevant to battery technologies was a challenge,” said Quentin Ramasse, Director of the SuperSTEM Laboratory. “This is a perfect example of why the multiple imaging and spectroscopy techniques available in electron microscopy make it such an indispensable and versatile tool in renewable energy research.”

The detector in conventional STEM simply counts how many electrons are scattered (or not scattered) in each pixel. However, in 4D-STEM, the researchers use a high-speed electron detector to record where each electron scatters, from each scanned point. It allows researchers to measure the local structure of their sample at high resolution over a large field of view.

“The introduction of high-speed electron cameras allows us to extract atomic-scale information from very large sample dimensions,” said Colin Ophus, a research scientist at NCEM. “4D-STEM experiments mean we no longer need to make a tradeoff between the smallest features we can resolve and the field-of-view that we are observing – we can analyze the atomic structure of the entire particle at once.”

This work was supported by the U.S. Department of Energy's Office of Energy Efficiency and Renewable Energy, Office of Basic Science, and Small Business Voucher Pilot Program; Envia Systems; and the U.K.'s Engineering and Physical Science Research Council.

Lawrence Berkeley National Laboratory addresses the world's most urgent scientific challenges by advancing sustainable energy, protecting human health, creating new materials, and revealing the origin and fate of the universe. Founded in 1931, Berkeley Lab's scientific expertise has been recognized with 13 Nobel Prizes. The University of California manages Berkeley Lab for the U.S. Department of Energy's Office of Science. For more, visit http://www.lbl.gov.