Home / Materials Sciences / How oxygen can enhance strength and ductility of high-entropy alloys
28.11.2018

How oxygen can enhance strength and ductility of high-entropy alloys 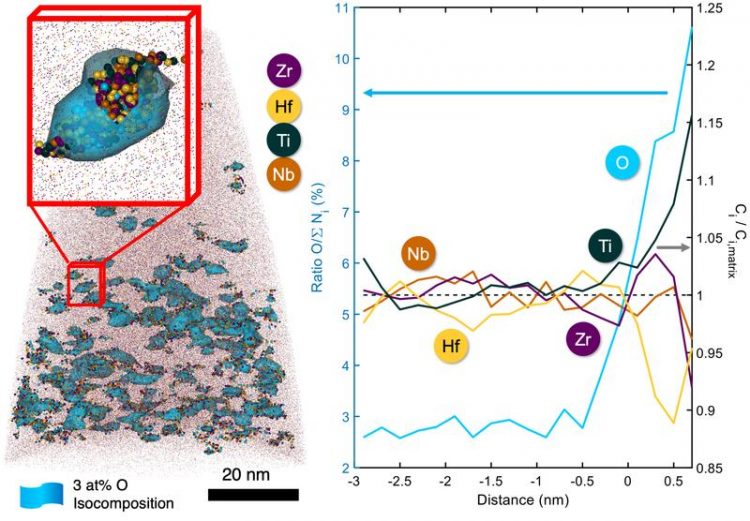 Researchers from the Max-Planck-Institut für Eisenforschung, Düsseldorf, and the University of Science and Technology Beijing discovered a new mechanism that enhances both the antagonistic strength and ductility in a high-entropy alloy.

The new mechanism is caused by the addition of oxygen in relatively high quantity, which alters the alloy’s microstructure and leads to an increase of strength by almost 50% and ductility of ca. 95%. The scientists published their latest findings in Nature.

Oxygen, which is usually neglected as an alloying element as it is known to cause embrittlement, is now added by 2.0 atomic percent in a model high entropy alloy (HEA) of TiZrHfNb.

The researchers studied the effect of oxygen on the microstructure of the HEA to understand the impact on strength and ductility.

Only STEM bright field and atom probe tomography revealed the main reason for the spectacular increase in strength: the oxygen is located at interstitial positions within agglomerations of lighter atom , i.e. Ti and Zr.

“We could reveal that the oxygen locates within zones containing only a handful of atoms that are enriched in Ti, and, to a lesser extent Zr. Within these zones, the oxygen is arranged in a highly ordered manner forming individual trapping barriers. At the same time the ductility is increased during deformation when these ordered complexes are cut by dislocations, which are the crystalline defect that carry the plasticity, and cause their multiplication and change the way they shear the crystalline lattice.”, explains Dr. Baptiste Gault, head of the “Atom Probe Tomography” group at the MPIE. The oxygen complexes act as small precipitates and cause a change from planar to wavy slip during deformation.

The presented alloy is a model system, exhibiting too little oxidation resistance. Research to improve their performance by adding Al, Si or Cr is ongoing. The interstitial complex strengthening mechanism could be forming in many other alloy classes beyond HEAs. The scientists are exploring other metallic systems in which the strengthening effects from these ordered complexes could be exploited, in particular alloys that are closer to engineering applications. The work was funded by the Natural Science Foundation of China.

The spintronics technology revolution could be just a hopfion away