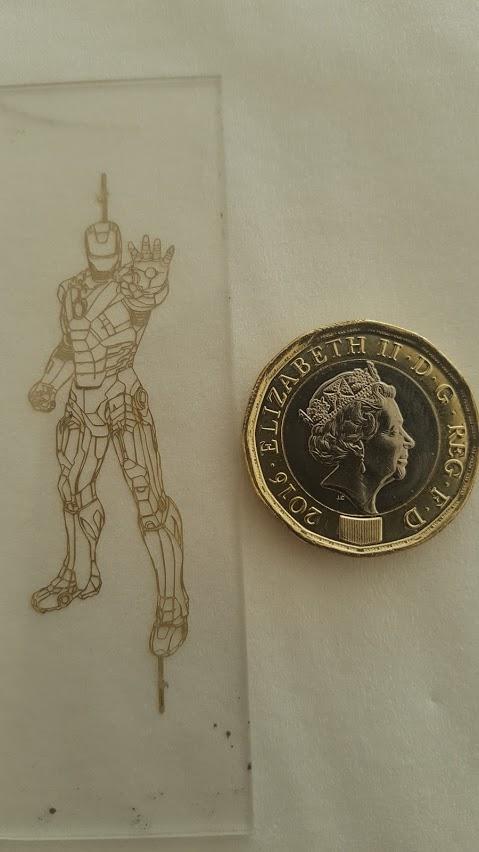 This is an Iron-Man-shaped electrode printed using the technique. Credit: Imperial College London

New generations of these devices are being made that manipulate molecules or work with smaller concentrations of molecules, for example detecting rare cancer cells in blood samples.

These require intricate patterning of minute electrodes. Getting the right pattern is key, but building prototypes of different electrode designs can be expensive and time-consuming, often requiring specialist equipment and expertise.

Now, researchers at Imperial College London, have created a method that allows intricate electrode patterns to be printed in community labs and hackspaces at a fraction of the time and cost. The details of their method are published in Scientific Reports.

Lead researcher Dr Ali Salehi-Reyhani, from the Department of Chemistry at Imperial, said:

“With our method researchers and startups can more easily design and develop analytical devices, even when they need electronics that can't be bought off-the-shelf.

“Community hackspaces are great for democratising science, allowing more people to try out new technology solutions. We hope this method will allow bioelectronics to benefit from that ecosystem of hackers getting hands-on with problems and solutions in healthcare.”

The method allows researchers to design electrode patterns on computers before printing them off using a laser-cutting printer. The cavities are then filled with metal using microfluidic techniques — using the science of how fluids move through confined spaces.

In this way, researchers could print several sheets of electrodes, each with a slightly different design, allowing them to be tested in rapid succession to find the best design.

Previously, designs may have had to be sent away to be manufactured, taking weeks or even months to arrive at the best design, but now the whole process can be reduced to a matter of days.

The team at fabriCELL, a centre of excellence in artificial cell science run by Imperial College London and King's College London, are now using the technique to prototype devices for manipulating and analysing cells.

They say the technique could be used to speed up the development of flexible wearable devices, such as skin patches that monitor health signals and devices, and devices that could be used in hospitals or GP surgeries, such as ones that can quickly distinguish between viral and bacterial infections with just a drop of blood.