Cold plasma: Get started with the Disc Jet 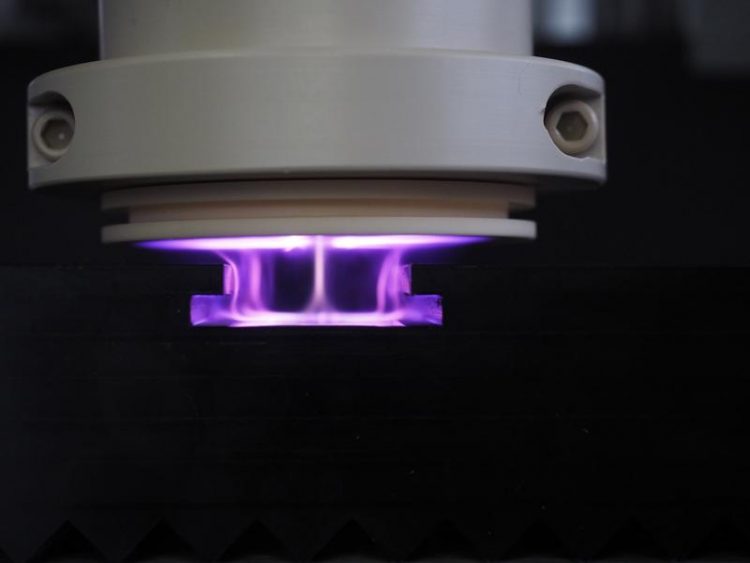 The Disc Jet can also be used to process cavities.

Fraunhofer researchers have produced cold plasmas and used them for the surface treatment of temperature-sensitive materials. In doing so, recesses or undercuts were no longer a problem, thanks to a new technology – the Disc Jet can reach everywhere.

Plasmas have long been used in industry to clean surfaces or to process them such that materials like paints or glues adhere to them more effectively. The advantage: Chemical pre-treatment with solvents or other substances can be dispensed with. This saves money and is environmentally friendly. The problem:

Previously, only flat surfaces could be treated; the plasma simply slid over recesses, cavities or undercuts. Researchers at the Fraunhofer Institute for Surface Engineering and Thin Films IST have now combined two plasma processes – the plasma jet and the glide discharge – in order to be able to also process three-dimensional components effectively.

Optimal for the treatment of plastics or wood

“Inside the plasma jet, which essentially consists of an electrode and a nozzle, a cold plasma is generated with the help of alternating voltage,” explains Martin Bellmann, engineer in the Application Center for Plasma and Photonics of the Fraunhofer IST. Depending on the requirements, different gases or gas mixtures are used.

The high electrical voltage of the electrode ensures that negatively charged electrons leave the atomic shell; the larger, positively charged ions remain behind: the gas becomes conductive and, therefore, turns into energetic plasma.

“Because the plus and minus poles of the electrode change constantly, the ions hardly move and release little energy in the form of heat, while only shaking back and forth a little,” says Bellmann. In this way, the temperature can be kept low at 30 to 60 degrees Celsius – which is ideal for the treatment of heat-sensitive materials, such as plastics or wood.

The free electrons are then blown onto the component with a nozzle. Because the material surface is not conducting, they cannot react with it. Therefore, they fire back to the underside of the jet. This results in numerous small flashes, so-called sliding discharges, which spread out concentrically around the nozzle between the underside of the device and the component.

“The shape of this spread is reminiscent of a CD, which is why we have christened our development the Disc Jet.” The result: uniform treatment of the complete surface – wells, recesses and undercuts included.

The plasma jet works not only physically by roughening the surface slightly (which makes it easier for applied substances to adhere) but also chemically. This occurs because the unstable atoms and molecules of the plasma are highly reactive. If air is used as plasma gas, for example, the individual oxygen atoms dissolve hydrogen atoms from the plastic surfaces, thereby enabling a better adhesion of paints or adhesives.